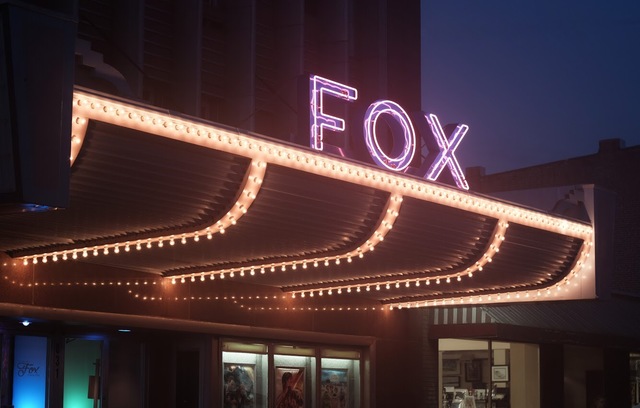 The Strand Theater was opened on July 1, 1919. By the early-1930’s it was another Fox owned and operated theater. Seating was listed at 816. It was a bit larger than its sister theater across and down the street (Orpheum Theater).

My Mom lived in Fort Madison, Iowa during the 1940’s-early 1950’s. An avid moviegoer, she mentioned the Strand frequently. It appeared to be her movie theatre of choice. Thanks for the information about it.

With the support of Fort Madison Main Street and Main Street Iowa, we have received a grant and we will start restoration of the marquee in the spring of 2012. In addition we will be doing additional roof repairs.

Thanks to all for your continued interest in the Fox Theater.

If you are interested in seeing the Fox inside and out, please feel free to look at an electronic tour that I have built by using the attached link.

The monthly Stone & Webster Journal had the following item in the Fort Madison section of its July, 1919 issue:

“The new moving picture theater called the ‘Strand’ was formally opened on July 1st. This new theater is modern in every respect and is reported to be one of the finest picture houses west of Chicago, having a seating capacity of nearly 1,000.”

The August 11, 1928, issue of Motion Picture Times published remarks from the manager and publicity director of the Strand and Orpheum Theatres in Fort Madison, accompanied by a small photo of the entrance to the Strand looking as though it had been decorated to publicize a particular movie.

Joe, thanks for the information. I will add that to all of the history materials that we have for the Strand/Fox.

The article Tinseltoes linked to has the name of the architect for the conversion of the Strand into the Fox, but the scan doesn’t show a few letters at the beginning of each line in the left column of the page, so the architect’s surname is missing. He was Samuel W. (something short) Jr..

I’m thinking it must have been Samuel W. Bihr, Jr., who was a contract architect for Fox Midwest in the early 1950s, designing everything from minor remodeling jobs to entirely new theaters. His designs of the period were typically transitional Streamline Modern/Midcentury Modern, which fits the Fort Madison Fox.

From 2012 a photo of the Fox Theater in Madison

Probably the worst thing they did was twinning the thing. But I believe it could be successful as a twin. It all depends on how it’s booked. I don’t think live performances would work. Thw auditoriums are now too small and it does not appear to have fly screens.

Currently considering going back to one screen. Still working on keeping the building solid and sound. New roof project completed this summer. For those of you that still show an interest in the Fox, THANKS!

This theatre re-opened on March 3, 2017. Operated by Eisentraut Theatres of Hillsboro Illinois.

Congratulations to Eisentraut Theaters! Best wishes to you in the future.