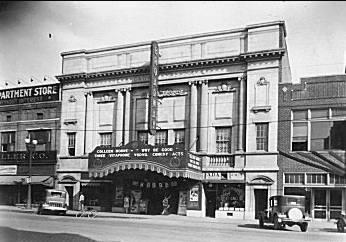 From 1950 until the theatre closed in the mid-1960’s it was operated by R.D. Goldberg Theatre Corp.

This appears to be a duplicate of the Strand in Council Bluffs.

Here is a September 1948 ad from the Council Bluffs Nonpareil:
http://tinyurl.com/lr2otb

The Broadway Theater was on the opposite side of the street from where the Omni now sits. Odd number address are on the south side, even numbered on the north. There is a bank on the property where the Broadway use to be. The Omni was originally knows as the Midlands Four, I believe, as that was the name of the mall.

The address of the Strand Theatre was 554 West Broadway, so it is listed incorrectly.

January 25, 1965, issue of Boxoffice: “Work on remodeling the old Broadway Theatre in Council Bluffs into a King’s restaurant is nearly completed.”

The Broadway had been closed earlier, though. The September 16, 1963, issue of Boxoffice said that the Cooper Foundation was installing equipment taken from its Broadway Theatre in Council Bluffs, including the projectors, in the Dundee Theatre in West Omaha, which would then be leased to an independent operator.

In 1958, the Cooper Foundation had taken over the Broadway and eight other theaters formerly operated by Ralph Goldberg, according to the March 31 issue of Boxoffice that year. Goldberg had died in 1956.

The Foundation closed the Broadway in 1959, after remodeling the old Town Theatre into the Cooper Theatre, according to Boxoffice of February 2 that year. By 1962, the Broadway was open again, apparently under the operation of an independent lessee named Earl Nansel.

The November 25, 1944, issue of Boxoffice said that the Ralph D. Goldberg company was presenting stage shows at their recently-acquired Broadway Theatre in Council Bluffs.

An earlier incident in the Broadway’s history was a fire reported in the December 21, 1940, issue of Boxoffice. The conflagration, causing $30,000 damage, was largely confined to the stage area, but the auditorium and booth suffered smoke and water damage.

I’ve found the Broadway mentioned in issues of Movie Age as early as 1929. The earliest was in the January 19 issue, which said that Vitaphone sound had been installed at the theater, and then the April 13 issue said that the Broadway at Council Bluffs was now under the operation of the Paramount-Publix chain.

Publix apparently operated the house for only a few years. By 1937, it was being operated by Earl Kerr, who would sell the house to Goldberg in 1944.

Grand opening was March 31, 1923 with Jack Coogan in “Daddy,” Buster Keaton in “The Balloonatic” as well as Randall’s Royal Orchestra, Broadway News Review and Ralph Mason at the organ.

The opening date found by dallasmovietheaters is a strong indication that this brief item from The Moving Picture World of March 4, 1922, is about the Broadway Theatre:

“Jenson” is probably misspelled, and the architect of the Broadway was most likely J. Chris Jensen, a Danish-American architect sufficiently well known in Iowa to warrant this Wikipedia page.