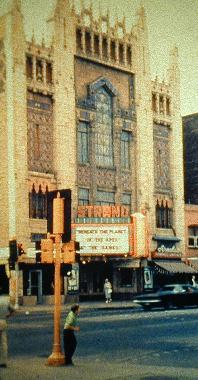 Originally opened as the Dohany Opera House in 1883. It was renamed Strand Theater in 1916 and was owned by A.H. Blank Theaters (Paramount Publix), when the theater opened it seated 593. It was remodeled in 1927 to the plans of architect Henry J. Schneider. It was operated by Fox Midwest Theatres from 1940 through 1955, and from then until 1964 NTT Amusement. It reverted back to the Fox Inter-Mountain chain until the late-1960’s. It was finally operated by an independent operator and closed December 31, 1973 with “Paper Moon” & “Play it Again, Sam”. The building was destroyed by fire on December 11, 1974.

This article dated ½/74 notes that Mann Theaters of Los Angeles renown was the last owner:

(AP)â€"The western Iowa city of Council Bluffs now is without a standard movie house. The Strand Theater closed down after its last performance Monday night. The only other theaters in the city of 60.000 persons are the Crest Art Theater and a drive-in theater. Though the closing was news to most Bluffs moviegoers, Manager Shelby Doty of the Fox Theater in Omaha, Nebraska said it had been planned for six months. He said Mann Theaters of Los Angeles, which also operates the Fox Theater, gave six months notice last July it was dropping its lease of the Strand.

Doty said he had seen no revenue figures on the Strand, but he “would assume” the lease was dropped because the theater was not making money. The theater’s final program was a double feature, “Play It Again, Sam.” and “Paper Moonâ€.

There is a 1970 photo on this site. You have to scroll through the pictures:
http://tinyurl.com/23nlnx

E. P. Juel, secretary of the Council Bluffs Savings and Loan association, who had been named by the court as referee to carry but the partition and make the sale of the property, reported it was made to Smead at private sale. The sale price was the appraised value that was placed on the property, the referee reported to the court.

Smead had filed the partition suit last year. On Jan. 22, District Judge Charles Roe handed down a decree holding that Smead, Morris Cohn Smead and the estate of the late Benjamin Harding each
owned two-ninths interest. The trusteeship under the will of the late Samuel Harding owned a one-third interest, the court held. Samuel Harding died Feb. 22, 1947. Benjamin Harding died May 24. 1951. The court had appointed Leon Morse and Howard Shortley, local realtors, to appraise the property.

I think this is a duplicate of the Broadway Theater entry.

The Strand was demolished shortly after the fire on December 11, 1974.

I’ve been puzzling over the conflicting addresses listed for the Strand Theatre and the Broadway Theatre, as both are listed with odd numbers, which would put them on the south side of Broadway, but I remember the Strand Theatre and it was on the north side of ths street. I verified with a friend who grew up in Council Bluffs and he confirmed that the Broadway was on the south side. Finally, I found the following on a website of The Historical Society of Pottawattamie County: “In 1927, the Dohany Opera House at 554 West Broadway was remodeled into the Strand Theatre. In addition to movies, the Strand was also home to broadcasting studios of radio station KSWI in the late 1940s. The Strand was destroyed by fire in December, 1974.” At last, the mystery is solved! The Strand Theatre address is listed incorrectly!!!

Mann was not the last operator of the Strand. An article about the destruction of the theater by fire on December 11, 1974, was published in Boxoffice Magazine’s issue of January 13, 1975. The operator at the time was Joella Cohen of Omaha.

The item also mentioned that the Strand had been built as an opera house in 1890 and had undergone a major renovation in 1927.

With regard to the Dohany Opera House: the only listing for Council Bluffs in the 1897-98 edition of the Julius Cahn Official Theatrical Guide is Dohany’s Theatre, 1,226 seats, George Bowen, Mgr. It was on the ground floor. Unfortunately, there are no street addresses in this Guide. Tickets cost 25 cents to 75 cents, and it had both gas and electric illumination. The proscenium opening was 30 feet square, and the stage was 39 feet deep. There were 7 to 10 musicians in the house orchestra. The 1897 population of Council Bluffs was 35,000.

The Dohany Opera House became the Strand Theatre in 1916, as noted in the November 4 issue of The Moving Picture World:

“Council Bluffs. Ia. — The Strand theater, which is the name of the remodeled Dohany opera house, opened with ‘The Common Law.’”

Dohany’s Opera House was built in 1883 to replace an earlier house of the same name that had opened on the second floor of a livery stable in 1868. The new Dohany’s original seating capacity was 1,400, which probably included a gallery.

In 1927 the Strand was completely remodeled inside and out, the original Victorian Italianate front being replaced by the eclectic, polychrome terra cotta, Gothic-Moorish-Art Deco fantasy that remained for the rest of the theater’s history. The interior was redone in a more restrained Classical style.

Warner and Roenfeld attribute the design of the 1927 remodeling to Council Bluffs architect Henry J. Schneider.