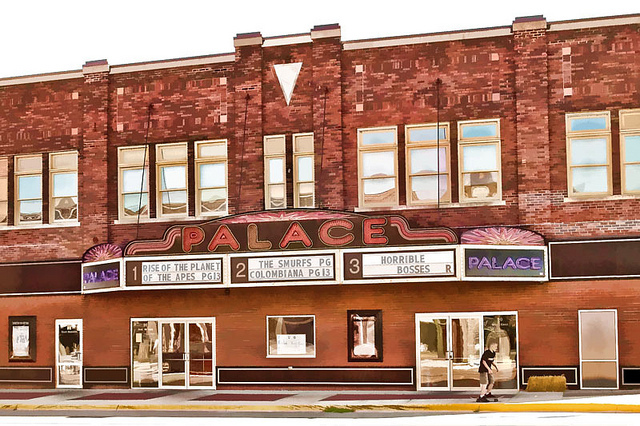 The Waverly Theatre opened around 1927 as a single screen theatre. It was remodeled and made a triplex in 1999. During the 1960’s it was operated by Iowa United Theatres. Seating for the three screens is listed at 440. It was closed February 19, 2018.

The Waverly Theatre building was built in 1927-1928. What I do know about past ownership goes back to the 40s when the Hageman family owned it. I believe they sold it to Ernie and Dorthy Thies in the early 50s. The Thies’s then built the Waverly Auto Vue Drive-in east of town in about 1952 or 1953. Dorthy Thies then sold the theatres to my father Gerald Peterson in 1964 and took over on January 1st of 1965. Over the next 31 years he also owned these theatres in Iowa. the Center in Grundy Center, the Sunset in Sumner the Firemans in New Hampton, the Avalon in West Union,the Grand in Eldora, the Capri in Oelwein, the Monte in Monticello, the Evans in Anamosa, the Fox in Fort Madison and the Princess in Eagle Grove. He was also part owner of the Malek in Independence and the Castle in Manchester

The Palace Theatre is fully digital with 3D capabilities. Website

I raised my sons in Waverly from 1992 until 2013. Waverly is small enough that the kids would go downtown to the Palace Theater on their own and we parents didn’t worry about them. Although getting to Waterloo and Cedar Falls about 20 miles south wasn’t difficult, it was more fun to go to the Palace instead to sit among neighbors. The movies being shown were sometimes first runs, more often second runs, but there was a strong emphasis on having at least one of the three movies be appropriate for kids. Even being divided into three theaters, it truly follows in the tradition of old-time Main Street theaters.

“"It has been announced with much sadness that the Palace Theater here in Waverly will be closing the business effective Monday, February 19th.

Back in 1999 the antiquated theater building was acquired and underwent a major renovation to resurrect the one time cornerstone of the downtown area on Bremer Avenue. “The project was taken on in hopes of being a springboard for further development in the downtown area”, states Gary Nelson, President of Phoenix Theaters the owner of the Palace. “Back in the 90’s the theater was identified as a key component of helping to jumpstart renewed interest in downtown development. The building and the theaters themselves had deteriorated to the point that there was only one working speaker in the main auditorium.”

The renovation created a new front lobby, main floor bathrooms, all new state of the art sound and projections systems and added a third screen to the building. Unfortunately, the success of the renovation was short lived. “The 2008 flood here in Waverly inundated the building with flood waters and forced the closing of the theater for a couple of months. Once it reopened 30% of the business just never returned, states Nelson. Shortly after the flooding, the industry moved to digital distribution of movies which made film on reels obsolete. New digital projection equipment was necessary to remain in the business and was invested in and installed.”

“The theater has continually struggled to cash flow and the Bremer Avenue reconstruction this past summer dropped business an additional 30% right during the peak spring/summer season and added to the struggle, Nelson said. The digital world is changing how consumers are getting their entertainment. Movie attendance in Waverly is half of what it was 15 years ago and it becomes increasingly difficult to operate a viable business. It becomes a vicious cycle of needing to keep the theater current and up to date but trying to do so with a dwindling level of support, Nelson explains. It really gets to a point where financially you can’t be proud of the product we are putting out there for the community”.

“Conversations over the past couple of years have centered on whether the Waverly community even wants a local theater, according to Nelson. Could the community get behind a “community theater” that might be owned by a non-profit type of community group? I don’t know the answer to that but for now the theater will be closed and the building/business will be put up for sale”.

“To me this is a sad day for the city of Waverly, states Nelson. Hopefully, something can come along that can utilize this historic building in downtown Waverly”.

I think Waverly is large enough to support a for profit movie theater. They don’t have any locations in Eastern Omaha, but it needs to be operated by someone like Main Street Theatres of Omaha, which besides Sioux City and Omaha only have theaters in large towns and very small cities. I think the major problem was management. A three screen theater in a town of nearly 10,000 people can be profitable if run well. Sounds like they operated it expecting it not to be profitable, so they didn’t put the effort to make it profitable.