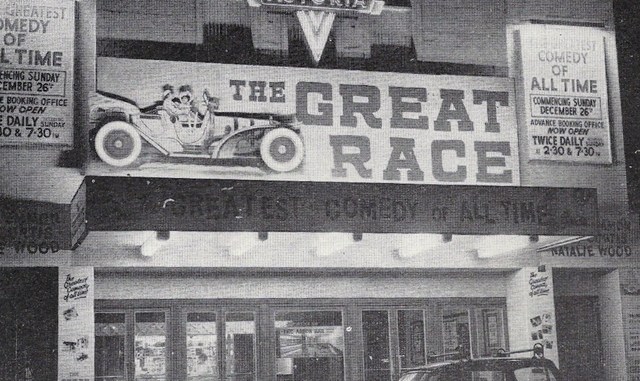 Located close to the famous Brighton Pavilion, this was a construction for a local independent consortium headed by E.E. Lyons, who built several Astoria Theatres in southeast England seaside towns. The Astoria Theatre opened on 21st December 1933 with Charles Laughton in “The Private Life of Henry VIII”.

It had full stage facilities and a spectacular Art Deco style interior decoration scheme. A Compton 3 Manual/8Ranks organ with illuminated console was installed and opened by organist Guy Hindell. The Astoria Theatre was taken over by Associated British Cinemas(ABC) chain in February 1935.

The stage was infrequently used for live shows up until 1958 when the theatre closed for renovations which installed a vast 70mm screen in front of the old proscenium, removed the organ, and curtained the impressive auditorium.

The balcony steppings were altered and a new projection suite constructed at (and into) the rear balcony.

Long runs of such films as “Earthquake” ensued and the cinema continued successfully until just after the other ABC house in town was quadrupled in 1976. The Astoria Theatre closed on 7th May 1977 with Barbara Streisand in “A Star Is Born”. It became a Coral Bingo Club. This lasted until approximately 1996, when it was operated by Gala Bingo Clubs, after which the Astoria Theatre has stood empty and unused.

In 2001, it was bought for around £1 million, with plans to be restored (not known if to original design) and reopened as a live (mainly concert) venue. However, those plans stalled, and the building was sold again for £4 million. It was still sittting empty and unused into early-2013, when plans were approved to demolish and build an office block. This plan was dropped and a new plan for a developer to build luxury flats on the site was approved by Brighton Council. In June/July 2018 it was demolished.

The Astoria Theatre was a Grade II Listed building.

In 1963 I went on holiday to Brighton with my father. We went to a number of cinemas including the Astoria, which was showing Mutiny on the Bounty in 70mm. The sound from the six tracks was fantastic and was as good, in my opinion as any modern sound system such as Dolby stereo or DTS.Projecting the 70mm images was the popular Philips DP70s. Before 70mm, Kalee elevens put the pictures on the screen. One of the projectionists was a Mr Ted Jempson, who sadly is no longer with us.The picture and sound at the Astora certainly made an impression on me.

A vintage view of the auditorium in 1958, just prior to conversion into a 70mm/Todd A-O Roadshow cinema:
View link

Following years of neglect it now appears that the former Astoria cinema will be demolished having received permission to do so by the local authority.

Although this will most likely be challenged it is unlikely to reverse the situation. A venue of this nature in a city such as Brighton ought to be a viable business opportunity offering a multipurpose venue that can be financially rewarding. However, with no business plan or vision for alternative use and restoration over a decade or so it is unlikely that the local authority or those listening to any appeal will have a change of thought. It is Very sad indeed.

Alas for all the hard work by so many this lovely cinema is no more.My first visit was in 1966 when the cinema had the first provincial run of Dr Zhivago.In 1968 a 70mm showing of 2001:A Space Odyssey was a wow. Gone With the wind had several showings here including as late as late as 1975 for a months run. Brighton has become infamous for being the place that knocks down it’s cinemas or leaves the buildings both cinemas and theatres to rot (Hippodrome Theatre Frank Matcham)until they have to be pulled down.That’s one reason i moved last year 2012 to Eastbourne where they value there four theatres and original town cinema, the Curzon. I have a full history of the Astoria plus a rare film poster from 1935 which hangs on my flat wall.Much missed.

I worked at his theatre/cinema as a relief projectionist for EMI. I am sorry to hear that it is due to be demolished. A lot of money when into trying to save the building. But it was never going to be saved the land it stands on is worth far to much, if used for something else.

From what Ive read on urbex sites this cinema has been totally trashed inside and thats all on the side of the “big hammer merchants” with the smell of banknotes in their nostrils. Shame.

Looks like it’s going to have the wrecking ball on it. A great cinema that made an impression on me. Sadly, we have lost so many wonderful cinemas.

Yes.. Which proves grade ll status is not worth the paper its written on. work should be aimed at minimum of Grade ll star and there are very few of them in the UK.