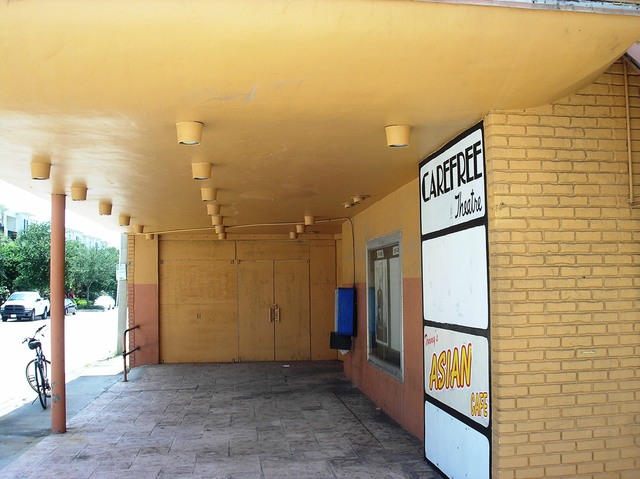 The Carefree Center Theatre was opened on November 19, 1947 with Fred MacMurray in “The Egg and I”.

And its still a great name!

Five years after closing, the Carefree building is available for lease — and a coming attractions poster for “Capote” remains, slowly fading in its frame. Those who would dare take it over may be looking at more than a million dollars' worth of upgrades to code.

My name is Vil. I once had the honour, for a short time, in 1998, of being in the Rocky Horror Picture Show cast that was at the Carefree theatre. This started in approximately February of that year. I truly regret the loss of that theatre and have very fond memories of the times that I had there with Ron Lee, Kate Humble, Justin Blaine, and others.

Grand opening ad from November 19th, 1948 has been posted in the photo section for this cinema.

It all started in 1936. The building front on Dixie housed a soda fountain/cafe with billiards. Across the hall was a 10-lane bowling alley (later to become the Comedy Corner). The alley opened with “pin boys” who manually set the pins and rolled balls back to players. Automatic pin setters were later installed, at a cost of $50,000 a piece! In the early 60’s, part of the billiards room had pink carpet, attracting many women to the sport. When air conditioning was later added to the billiard room and bowling alley, people actually complained.

The theatre began construction in 1946 and opened in 1947 with “The Egg and I” (Fred MacMurray and Claudette Colbert). It originally had 800 seats but the two front rows were later remove to add a thrust stage in front of the curved screen, reducing the seat count to 772. The screen measured 16 x 42 with a focal distance of 150 feet. A glass-front “crying room” (for parents with babies) was upstairs next to the booth. Alone the north wall, retail space was along the street (a barber business existed for years) and a suite of offices and dressing rooms located upstairs. The theatre was cooled by a 1946 60-ton York reed-valve compressor. Although very inefficient by today’s standards, it was capable of keeping a full auditorium at 72 degrees on a steamy summer afternoon.

The Carefree usually beat out the competition in Palm Beach with premiere showings of films. The theatre was so successful at the beginning that film companies would not believe the ticket grosses. In the late 40’s/early 50’s, it was claimed that 1 in 10 people in Palm Beach County visited the Carefree Center every seven days. In 1950, outdoor roller skating was tried on the roof of the theatre but only lasted one season.

When Fantasma took over the center, many conversions took place. The Comedy Corner was established in the area of the old bowling alley (carpet was placed over the alleys) along with a retail art gallery. At the time, it was the largest single screen theatre in the state of Florida. And in case you’re wondering, “Larry the Cable Guy” (Dan Whitney) got his start at the Comedy Corner as the warmup act/door person. Along the front of the building, a bistro and sports bar were added. The theatre got some updating with projection equipment (Century head with zenon lamphouse – converted to platter system at this time) and Dolby sound. The screen was later replaced with a silvered screen for 3-D. It was the only house in Florida with the aperture plates and lenses for the four major aspect ratios of motion picture film (1.33, 1.66. 1.85, 2.35). Fantasma began offering sub-run movies, live concerts on stage, and becoming the home of Rocky Horror Picture for South Florida (every Saturday night at midnight – third longest running program in the US). Films were later changed to first-run foreign and art in 1990, becoming the most successful art house in America. Concerts were primarily jazz and reggae but included live comedy (Sam Kinison) and jazz-pop (Basia). Harry Connick, Jr. and Melissa Etheridge performed on the Carefree stage just prior to “making it big”. BB King would always play two performances once a year to sold out crowds. Due to the size of the Carefree, it was the perfect place for an intimate concert. Several world premieres were held at the theatre, most notably the infamous film “Scooter in Palm Beach” (don’t go looking for it – it was so bad it was either retitled or completely removed from the history books). The theatre also played host to the Palm Beach Film Festival and the South Florida Jewish Film Festival every year.

Unfortunately, damage caused by the hurricanes of 2004 forced the closure of what was the jewel of the entertainment business in Palm Beach County.

The Carefree Theater was demolished in September 2016. Some demolition photos added.

Article below about demolition.

Apparently the new plans are on hold.