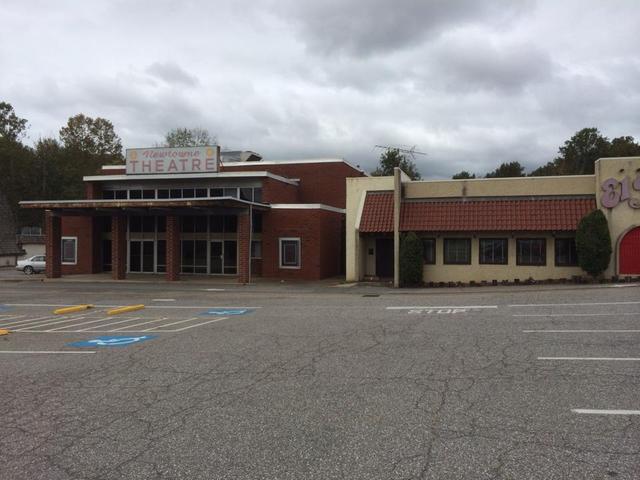 The Newtowne Theatre was opened on April 26, 1967 as a single screen cinema, with a seating capacity of 530. Owned and operated by Statesville Theatre Corporation under Fuller Sams. The architect was Thomas Hutchens. The premiere attraction at the grand opening was the showing of “Hombre” starring Paul Newman. By 1978, Martin Theatres took over this theatre and twinned it. Later on Carmike Cinemas would acquire operations until its closing in 2000.

Over the years, the interior has been remodeled and the Art Deco concession stand has been painted over and stripped of its former metallic accents. In a few sections of the lobby, you can also see where the carpet is covering up a rather nice wooden floor.

The box office has also been stripped to nothing but a bare floor, an old counter top, a torn ‘CLOSED’ curtain, and a microphone with a short in it.

What business was left after the opening of AM Star and Eastern Federal megaplexes down the road, in Mooresville and Hunterville, was eaten up by a sister theater across the highway.

Owned and operated under Statesville Theatre Corporation under Fuller Sams as a single screen cinema with a seating capacity of 530. The architect was Thomas Hutchens. The premiere attraction for the grand opening of the Newtowne Theatre was “Hombre” starring Paul Newman and Richard Boone.

Was twinned by 1978 when ownership changed to Atlanta-based Martin Theatres and renamed the Newtowne Twin split it into two sections with a seating capacity of 265 each.

Carmike Cinemas took over this theatre in 1986 until it closed in 2000 when it was a second-run discount house.

I have the ads if you need to see them

Newtowne is actually beside the JR Tobacco Discount Outlet. It’s still standing unless it’s been torn down in the past month or two. It’s sandwiched in between the JR Outlet on the left side near the highway and the pizza place with the high pointed triangular roof that is right off the highway.

We have several decent photos of the exterior in the photos section now. Could we get one of them to replace the empty sign as the main photo? I was out there the other day and that sign has been removed too at this point.

Video of this theater on You Tube as of 12/29/16. Recorded in April 2016. Theater and surrounding restaurants closed but still there. Shots of the interior only of what could seen through the front windows. Lots of mold but everything still intact. https://www.youtube.com/watch?v=fzZRcLMIh6k

Newtowne still stands. Old site of Village Inn Pizza was demolished a few months ago. Weird seeing it from the highway without the old Village Inn A-frame there. I’d imagine Newtowne is not much further from demolition. This whole area is pretty much a ghosttown outside of the Starbucks near the front.