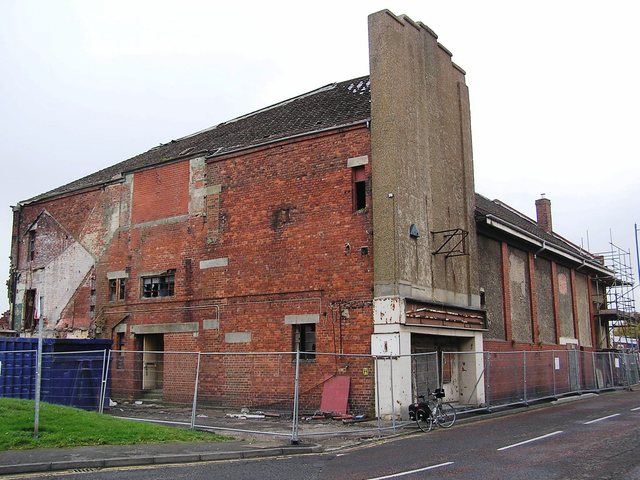 This is allegedly the work of the Milburn Brothers (William and Thomas Ridley) who designed such theatres as the Dominion Theatre in London and Mayflower (Empire) Theatre in Southampton.

Looking at the exterior of the Empire Seaham Harbour it is difficult to credit this with much truth, however this does pre-date their monumental theatre work (excepting the Sunderland Empire) and they are known to have designed other buildings in the town, so it is just possible!

The Empire Vaudeville and Picture Palace opened on 1st July 1907 with 1,200 seats. The name was a mouthful that was soon shortened to just Empire Cinema from 1912. It had a good sized stage, but no fly tower and was equipped as a cinema from the start. After 1944, stage use largely ceased. In early-1954 CinemaScope a 4-track stereophonic sound was installed, and Richard Burton in “The Robe” was the first film screened using this process. It was closed on 31st August 1968 with “South Pacific”.

It was purchased by the Durham City based Fairworld Cinemas in 1972 and after repairs and alterations, including installing a false ceiling from the underside of the circle and a new projection box at the rear of the stalls it reopened. The circle was closed off. In early-1979 a serious fire damaged the building. There were plans to reopen as a cinema in the former circle and operate bingo in the former stalls, but these were never realised, and Modernisation Ltd. created a 285-seat cinema in the former stalls area, with the circle, foyer and offices all on the upper floors remaining unused. It re-opened in the autumn of 1979 as the Fairworld Cinema Centre. The Fairworld Cinema Centre was closed in March 1982 and was converted into a bingo which continued until 1993. The whole area was demolished in September 2006 prior to redevelopment.

As the former CEO of the Cinema Division of “FairWorld Cinemas” and upon checking information for a private purpose, I have to correct some of the “many” discrepancies in the history of my former cinema as hereunder:– Regarding the stage (backstage) being removed for installation of CinemaScope, this is incorrect! The stage area was fully intact as early 1954 CinemaScope and 4 track stereo sound was installed and opened with “The Robe” (20th Fox). When we took over the “Empire” as it was in 1972 (following the closure in August 1968 showing in full stereo “South Pacific”, the owners (Harrisons) had decided it was not viable any longer. We,(FairWorld), took control and it was decided to place a false ceiling blocking off the original ceiling thereby forming a “ground floor”/“stadium” operation. A new “projection room” was installed at the rear (under circle) and “Westar Projectors” and “sound” installed. Wall drapes were added and the whole operation was “ground floor”. The original circle foyer which was the full width of the auditorium was utilised for stock/fridge rooms etc. In early 1979 on the opening night of “The Omen” (a Sunday), the manager ‘phoned me at midnight telling me to “get down to Seaham” as the building was on fire! When I arrived the fire services had extinguished the flames and we found the auditorium and screen tabs and seats were black and it was assumed that a person/s hiding backstage had “torched” the stage area after closure. It was assumed that the person/s hid behind the stage drapes where there was the entry by a door to back-stage. We never caught the culprit. Having left the cinema to “settle” and having removed all the seating/carpets/drapes/ during the course of 6 months I had wanted to put a screen 2 in the sealed off circle area to thereby make the cinema more viable. Unfortunately, the insurance company stated that we had to put it back as it was or they would not “pay-out”! We, therefore, decided on a single screen and I engaged “Modernisation” who had carried out excellent work in the past at our Horden, and Washington cinemas. We re-opened in the Autumn (half term) with “Orca Killer Whale”! I had installed 285 new spaced seats, a new “Peerlux” silver screen,(curved), and all the walls were draped in Gold/Yellow fabric and Oyster screen tabs. I had new “Westrex” sound and the original projectors were in good order. I understand from a good friend of mine who was, at that time-based at Sunderland ABC that patrons who used to come there from Seaham used to “praise the standards” of our cinema at Seaham. Of course, I had changed its name to “FairWorld Film Centre” in the hope of getting that 2nd screen later in the circle. In 1982 our nearby “Princess Theatre” In Dawdon which had been on Bingo sine 1961 had to have a costly electrical rewiring throughout and the Directors decided to close it due to the cost. I was approached by them asking if I would relinquish my cinema for Bingo and they would find me the money to quadruple my Hartlepool “FairWorld Film Centre”, (formerly ABC). They knew that my Seaham cinema had, and was my “pet” as I had always found it to be my favourite! I reluctantly agreed to hand it to the Bingo section having been promised the money for an extra 3 screen at Hartlepool! (This did not transpire, hence my departure in 1983) My connection ended at that junction. Some 8 years after the “FairWorld” Company was sold to another outfit based in Scotland (CAC Cinemas/Bingo). They, in their wisdom or otherwise decided to close a number of the outlets operating Bingo and Seaham was a casualty. Unfortunately, it was left standing to “rot” and it was subsequently demolished for part of the land covering an “Asda” Supermarket. I had long before departed “FairWorld Cinemas” having “seen the writing on the wall” and formed my own Company.

As there are so many discrepancies in the history of the “Empire”/“FairWorld Cinema” that I have just noticed (having been tipped off by my friend Terry Charnock – a former “ABC” Manager that I feel the history should be corrected to a more factual read.