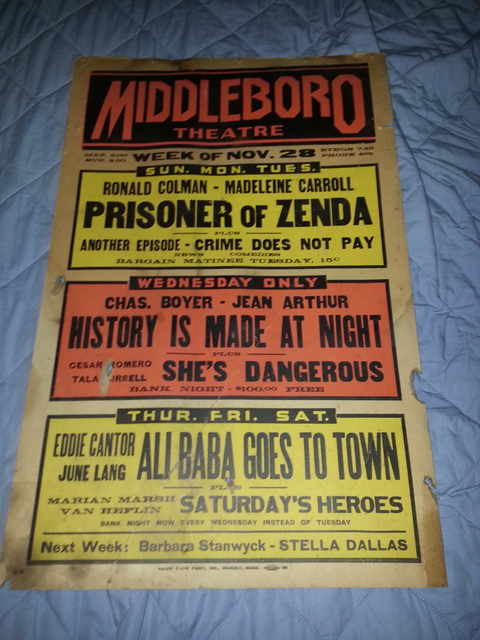 The Middleboro Theatre was the only theatre in the town of Middleborough, 35 miles south of Boston. It was opened as the Park Theatre in 1917. By 1934 it had been renamed Middleboro Theatre. It was renovated to the plans of Boston, MA architectural firm Krokyn & Browne in August 1948.

The MGM Theatre Photograph and Report form for the Middleboro Theatre has an exterior photo dated 1941. The theatre was a free-standing building 3 stories high with the legend “Middleboro Theatre” imprinted on the facade. There was a rain canopy above the sidewalk and several sets of doors, with poster cases. The Report states that the Middleboro Theatre is on “McKesson” Street in Middleborough, but that name does not appear on a street map of the town. The Report states that the theatre has been showing MGM films for 15 years; that it was built in 1910, is in Good condition, and has 346 seats on the main floor and 130 in the balcony, total: 476 seats. It was described as a “community theatre”, was the only theatre in Middleborough, whose population in 1940 was 9,000.

The address given in the 1950 Film Daily Yearbook is 1 Nickerson Street, Middleboro, which today maps as Nickerson Avenue. Seating capacity is 800.

When the intrepid MGM agent called in from Middleborough with the information he had gathered about the Middleboro Theatre, Nickerson must have sounded like McKesson to the person on the other end of the line ! What a dream job, driving around, photographing theatres and getting paid to do it.

Note that the renovation of the Middleboro Th. described in the Boxoffice Magazine article, Aug. 1948, which Gerry has posted, was total. The theater was closed for 3 months and stripped to the 4 walls. The theater at that time was also an “Indie” and not part of a chain.

Linkrot repair: The brief item about the renovation of the Middleboro Theatre in Boxoffice of August 14, 1948, can now be found here. The item says that the architects for the extensive renovation were Krokyn & Browne of Boston.