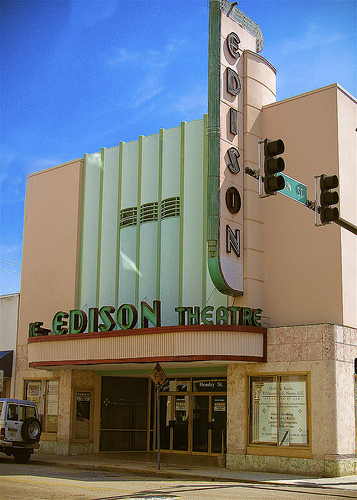 The Edison Theatre opened on September 9, 1941 with Sidney Toler in “Charlie Chan in Rio” & Paul Kelly in “Mystery Ship”. It was operated by E.J. Sparks, a subsidiary of Paramount Theatres Inc. The Edison Theatre was closed in mid-June 1981. The building still stands, now used as offices.

Here is a current picture of the Edison Theatre

The 650-capacity Edison Theatre opened on September 9, 1941 with Sidney Toler in “Charlie Chan in Rio” and Paul Kelly in “Mystery Ship” along with a Paramount News and a short involving the life of Thomas A. Edison.

Originally a second-run/B-film theater, but became a first-run theater shortly before the death of the Lee Theatre until 1980. The Edison became a special events theater which has a mix of classic and foreign films, but 21 months later, the Edison closed for the final time in mid-June 1981.