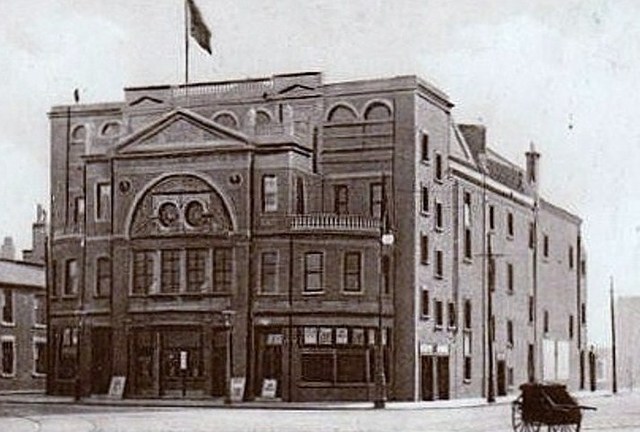 The Theatre Royal and Opera House opened on 26th December 1889 and was built for and operated by Frederick William Purcell who also operated the Theatre Royal in Rochdale and the Grand Theatre in Derby. For the next 96 years the building dominated the entertainment scene in Bury.

It was designed by Frank Matcham and was an extremely attractive theatre in the centre of the town, opposite the famous Market Hall at the corner of Market Street and Princess Street. It had a commanding facade in brick and dressed stone with a pedimented projection of three storeys in the centre and two at the sides, containing the principal entrances and a small shop at either side. Inside there were three balconies all supported on six pillars at each level at the front of the balconies, the gallery was the only place to sit without the risk of being behind an obstruction! By 1914 it had been taken over by Halifax based Northern Theatres Co. Inc.

In 1919 architect W. W. Longbottom was engaged to modernise the auditorium. He produced a most attractive theatre with two, instead of three, balconies, both of which were cantilevered thus eliminating the obstructing pillars. There was a box at either side of the dress circle, and three small boxes at grand (upper) circle level. Tip up seats were provided throughout the house, even in the cheapest seats. The balcony fronts were richly decorated with fibrous plaster. A generous stage and new backstage accommodation was also provided together with a scenic workshop. From 1933 it became a full time cinema.

The opening of the nearby Odeon Theatre spurred the next round of rebuilding. In 1937 the exterior was shorn of all decoration and clad in faience tiles, window openings (including two round ones in the centre of the projecting entrance) were retained but each of the two side portions was given an extra floor. The 1919 interior was entirely removed and a new Art Deco style auditorium was constructed, this time with just a single balcony. A wide screen opening replaced the ornate previous one and on each splay wall there were two tall narrow grilles. It was now known as the Royal Cinema and had 1,310 seats. The architects were C. R. and Chris H. Cooper.

In 1971 the circle area was sealed off and the extended stalls cinema was renamed Essoldo, but the following year saw another round of alterations as the cinema was taken over by the London based Classic Cinemas chain. The 449 seat stalls cinema was re-equipped and the circle was transformed into a 2nd screen with 346 seats. It is likely that the cladding with metal sheeting took place at this time. On this occasion Classics usual engineers, Construction Projects Partnership of Eastbourne were brought in to effect the rebuilding. It continued as the Classic Cinema until developers bought it. It closed on 9th May 1985 and was swiftly demolished to be replaced with yet more retail outlets.

The Classic Cinema was just four years short of its centenary. It predated all Burys other cinemas and was the last to close, the Odeon having ceased films in 1981. A Warner Cinemas multiplex was opened well outside the town in June 1989. This has now closed and a Vue multiplex has opened in the Rock Shopping Centre in the town centre, opposite the former Odeon Theatre.

More images of the Classic here:–