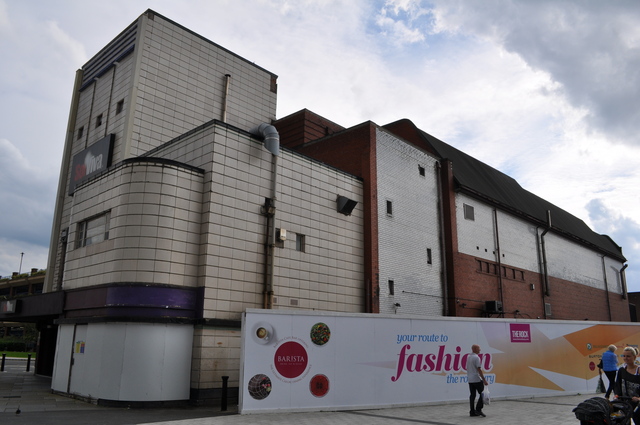 Built for and operated by Oscar Deutsch’s chain of Odeon Theatres Ltd. the Odeon opened on 16th November 1936 with Ned Sparks in “Two’s Company”.

Architect Harry Weedon (assisted by P.J. Price) designed a rather ‘boxy’ building that had a square tower feature over the entrance which was covered in cream faiance tiles. Inside the auditorium the Art Deco styling consisted of a series of troughs that went up the walls and over the ceiling which contained concealed lighting. Seating was provided for 1,027 in the stalls and 460 in the balcony.

The Odeon closed on 24th October 1981 with Mel Gibson in “Mad Max”. It lay unused for a while until it was converted into a nightclub, known as the Arena by 1988 and in recent years it has been a nightclub named Sol/Viva which closed in 2010. In August 2011, the building was empty and unused, with a notice warning it was ‘an unsafe structure’. Demolition work began in October 2013. The new Vue 10-screen multiplex opened in July 2010, located in The Rock Shopping Center opposite the former Odeon.

Interior photo after closure as a cinema here

I’m too young to remember this building as the Odeon however I do remember roller skating here when I was a kid. How fantastic that someone has a picture of the interior. I vaguely remember it looking this way but I have more recent memories of The Roxy and then Sol Viva. If anyone has any other interior pictures that would be really interesting!

A few additions to Ken’s notes from me – I grew up in Bury.

When the Odeon closed it stood disused and boarded up for several years before it re-opened some time in the mid-1980s as Arena, a roller-skating rink. Its subsequent incarnation as a nightclub began with “The Roxy” which in turn became the current “Sol-Viva” club which occupies the building.

At the time of writing (January 2008), as part of the town centre redevelopment in Bury, the building’s days seem to be numbered. The existing club’s parent company has a continuing lease for three to four more years, but the developers would like to see the building down before this and thus I expect it may be vacated sooner rather than later subject to agreement being reached with the parent company. The redevelopment plans include provision of a new building for the existing club.

I am now in discussions with the club’s management with regard to arranging a trip to photograph the entire building in the near future.

I was seven years old when this cinema closed. I can remember seeing several films here, including a double bill of Captain Jack and Spider-Man and Disney’s Bedknobs and Broomsticks.

My mum remembers the cinema suffered from poor heating and remembers watching several features in uncomfortably cold conditions – probably a contributing factor to the dwindling audiences of the late seventies and early eighties in this cinema.

On closure all the windows and doors were boarded up and the building looked very sorry indeed.

I managed to blag a look around when the place was being converted from Arena to The Roxy and took some pictures but they’re barely legible. I’ll see what my scanner can yield from the negatives, if I can find them.

I dream regularly about the place for some inexplicable reason and have done for many years. I’ve never been inside since the visit mentioned above so perhaps photographing it before it ceases to exist will exorcise a few ghosts for me!

Personally I’d love to see it stay and run again as an Odeon Cinema. Sadly society, the marketplace and the physical building don’t seem up to the challenge. That’s progress I suppose!

I scanned my negatives as mentioned above. Some aggressive processing in Photoshop has yielded results as below. They’re not brilliant but do show some of what I saw. There’s only one internal shot and it’s not much cop!

Ahead of the impending demolition I’ve cobbled together a page or Lens as Squidoo likes to call them about the Bury ODEON Cinema and I’d appreciate your feedback and comments before opening it up to a wider audience.

The page is at…

these photos are fantasic, how refreshing to see the interior before it was transformed in to a dingy nightclub. I had an awful feeling that the poor old ODEON was doomed for demolition as soon as the redevelopers moved in. its very sad that a piece of architectural history will soon be swept away just like much of the rest of bury

I have thought of asking (someone????) if it would be possible to gain entery before any demolition takes place to photograph the inside

not sure hpw to go about this… any advice?

In February 2012 the Odeon survives empty amidst all the redeveloped area. Externally at least it still looks in good condition. Photos:–

I love this building. Went to see her last week and took this shot.