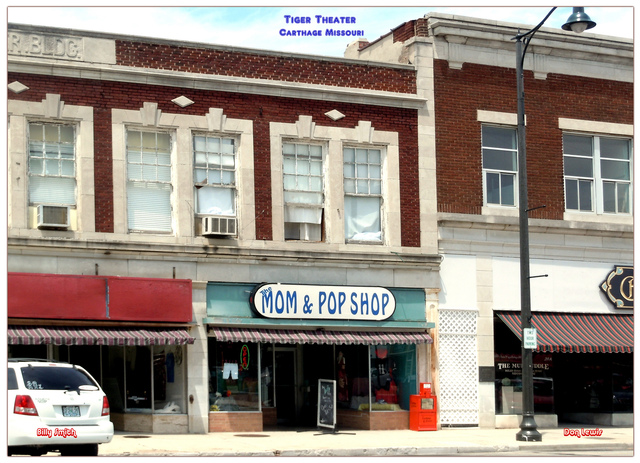 The Tiger Theatre was opened October 14, 1937. The auditorium of the Tiger Theater was destroyed in a fire in September 15, 1954. It was a Fox-Midwest theater at the time.

CARTHAGE, Mo.. Sept. 15â€"Fire which is believed to have originated in a trash barrel this morning swept through the Center building, and a theater on the west side of the square causing damage estimated unofficially at $250.000. Destroyed was the 900-seat auditorium of the Tiger theater, 319 South Main street, where the blaze originated, the rear portion of Jaffe’s shoe store, 321 South Main street, and the Murray-Duncan drug store, 323 South Main street.

The fire is now believed to have started in a trash barrel under the stage of the theater. It spread through the auditorium, causing complete destruction.

The theater was owned by Fox-Midwest corporation. Only recently new projection equipment and a CinemaScope screen were installed in the building at a cost in excess of $20,000. The fire spread from the theater to the rear roof of Jaffe’s and the Murray-Duncan drug store. Both roofs collapsed shortly after the theater roof fell in.

The Tiger Theatre’s entrance building is still standing. 319 S. Main is now occupied by a pizza parlor. The auditorium was probably on what is now a parking lot on Lyon Street.

From 2012 a photo of the Tiger Theater building in Carthage.