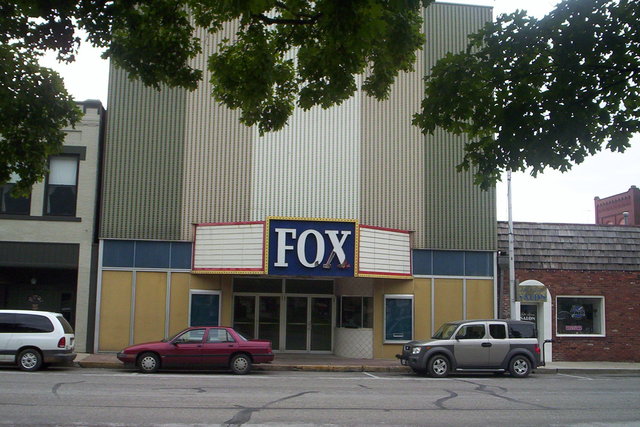 The Fox Theatre was closed as a movie theatre in the early-1980’s. It then sat abandoned until 2006, when it was converted into an event center, which had closed by June 2008. Ir has since been demolished. Only the facade and marquee with the Fox name survives.

On the cinematour website there is a listing for a Diamond Drive-in Theatre. There is a phone # and it is NOT listed as closed. I’d call the number but I’m assuming if it really still exists they would not be open this time of year anyway. Can any Sedalia residents shed some light on the subject? Thanks.

The Thursday, September 5, 1940, issue of The Sedalia Democrat said that the new Fox Theatre would open Friday evening at 7:30.

The 1960s aluminum false front has been peeled off of the Fox Theatre and replaced with a retro-style front that might more closely resemble the original Streamlined style of the building. The building has been converted into the Fox Theater Event Center, though the photo gallery at their web site shows that the historic interior of the building has been entirely lost. It’s pretty much just the shell of the theater, and a marquee with the name Fox on it.

Joe, could the Fox have been a renovation of a theatre already in existance. There was a 1400 seat Sedalia Theatre listed at the same address until 1939. The Motion Picture Yearbook also listed the Sedalia Theatre at that address. I posted a street view of what the Fox looks like today in the photo section.

Chris: The impression I’ve gotten from the articles in The Sedalia Democrat is that the Fox was brand new in 1940. These lines from a September 5, 1940, article are an example: “About the NEW FOX Construction: Fireproof throughout. Steel, concrete, brick with California stucco and tile trim. Dimensions: Over all, 45 feet by 120 feet. Seating Capacity: 1,000, with perfect view of screen from any seat.”

Of course such lines could also apply to a theater that had been substantially rebuilt. However, the location on 5th Street precludes any possibility that an older house on the Fox’s site was the Sedalia Theatre that opened in 1905. There are too many sources indicating that the original Sedalia Theatre was at 3rd and Massachusetts. If there was a Sedalia Theatre at the Fox address in the 1930s, it must have been a second Sedalia Theatre.

I have a friend who said he saw a musical show on the stage of the Sedalia Theater in 1936 located at 3rd & Massachusetts. In 1948 there was 3 theaters operating in Sedalia, the Uptown on Ohio, the Fox on East 5th St, & Liberty on West 5th St. As I recall the Fox was brand new in 1940.

Should really be listed as demolished. Everything behind the first few feet of the building is new, and the interior bears no resemblance to a theater.

The theater opened with Randolph Scott in “When The Daltons Rode” along with a Fox Movietone Newsreel, a Disney Cartoon: Mickey Mouse in “Pluto’s Dream House” (despite Pluto making a cameo appearance, the mouse himself was the star-billing in the short), a performance by Kate Smith doing “God Bless America”, and a live performance by Artie Shaw and his band.

Information about the theater goes as follows: Owned by Fox Ozark Theatre Corporation, the structure has a first floor seating plan which is an innovation in a midwest theatre planning in that in the rear of the theatre containing deeply cushioned loge seats with wider spacing. They constituted with a virtually reversed section. Steel superstructures form the basis of fireproof construction, and the projection and sound systems were recent designation and scientific development to insure a perfect screen development as of 1940. The original front of the theatre is a scene of 2 stories in height, of stucco finish with an opaline glass center, paneling with colorful flooded lights. The marquee is decorated with neon, with the lower part of the front being faced with decorative tile, with leatherette walls above the tiling in the lobby. The interior is richly appointed with the walls having in a colored plaster with fluorescent paint designs. The ceiling is made with a tile board in decorative designs and light fixtures to harmonize. The absence of both of the traditional proscenium arch and the customary footlights are also in the fully equipped stage. The foyers were in ornamental plaster with wide stairways, richly carpeted leading to the mezzanine and balcony. Lounge rooms for both genders are on the east side of the Fox. The lower floor seatings were divided into 3 sections with 2 center aisles. Correct posture chairs of the then-modern design have been installed with ample spacing and loge seats. The building is mechanically air-conditioned with a flow of pure fresh air being automatically adjusted to the outside temperature and capacity demands. J. E. Mater, a popular Sedalia manager who managed both the Liberty and the Sedalia Theatres later became Fox Midwest operators right after the Fox opened its doors, who became the manager of the Fox Theatre. Born in Kansas City (Missouri) in 1908 and was married to Ms. Jennie Ward of Abilene, Kansas at age 20 in 1928, who later had a child 2 years later in 1930. His office is on the mezzanine floor, with mechanical equipment and projectors all in the basement along with storage rooms, a room where a break deserves, and a few dressing rooms.