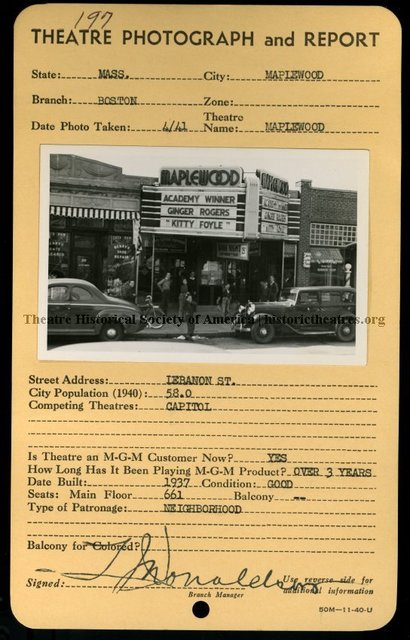 The Maplewood Theatre was an attractive modern cinema in the Maplewood section of Malden, a suburb to the north of Boston. It was operated by the Middlesex Amusement Company. Further information welcomed.

The MGM Theatre Photograph and Report form for the Maplewood Theatre in Malden has an exterior photo dated April 1941. Th entrance was within a one-story commercial block. It had a bright 2-sided triangular marquee with Maplewood at the top in neon letters. Below were 3 lines of black letters on a white background. The attraction posted was Ginger Rogers in “Kitty Foyle”. The Report states tht the Maplewood has been showing MGM films for over 3 years; that it was built about 1937, is in Good condition and has 661 seats. The type of patronage was described as “neighborhood”. The Maplewood was listed in the 1942-43 edition of the Motion Picture Almanac as part of the Middlesex Amusement Co. circuit (Ramsdell brothers).

An earlier Maplewood Theatre in Malden was destroyed by fire in early 1929, as reported in the April 6 issue of The Film Daily that year.