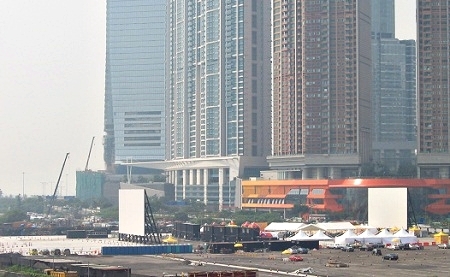 The Drive-In is the first drive-in cinema in Hong Kong. It is situated in the West Kowloon reclamation area near Tsim Tsa Tsui district on the Kowloon side of Hong Kong. The cinema has a total area of 200,000-square-feet.

It opened to business on 4th January,2007 with a Japanese-language film, “Nana 2”.

With the background of the skyline of the Hong Kong Island, the cinema has two 82-by-46 foot screens. Each screen has a capacity for 100 cars, 40 fixed seats in American classic cars and 10 VIP rooms with big windows converted from freight containers. The film sound is transmitted through 2.4 GHZ Wi-Fi Transmission System and received by the audio system in each
car.

The cinema has a snack kiosk with free delivery service. The snack order is sent by SMS message. Coming soon is an outdoor BBQ restaurant.

The Drive-In was managed by Elite Management with a lease of three years. However, it was closed in late-2007, after less than a years operation.

Remember Charlie Chan’s kid, “Number One Son”? How about number one drive-in?

Its Chinese name roughly translates as “ The huge screen by the Victoria Harbour”.

Drive-In had been shut down after it opened to business eight months ago.

Here is an interesting site that discusses the drive-in, along with some photos. This site confirms that the drive-in has closed due to lack of business:
http://tinyurl.com/2srmx4