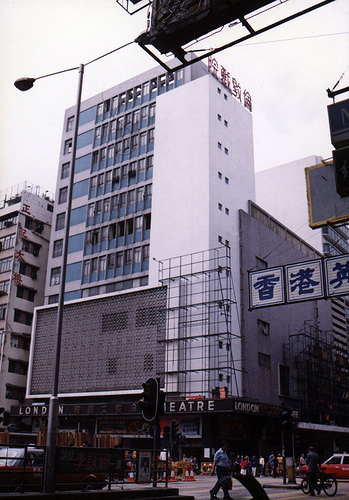 The London Theatre was situated in the Tsim Sha Tsui district on the Kowloon side of Hong Kong.

It opened to business on 5th February, 1962 with a first-run Cantonese film, and showed first-run Chinese dialect and English language films until its closure on 1st January, 1988.

Its 1404-seat auditorium with a 50-feet wide screen was on the first floor of the theatre building.The theatre had a lift serving the patrons of the dress circle.

A commercial building with a mini cinema was built on the site of the theatre.

Shame to say that I’d never been to London Theatre because I used to go to Century and they belonged to the same circuit as well as Lee Theatre at Causeway Bay in the 80s. However, before its closure, the kiosk at London Theatre was run by my mum’s friend, who used to give us tickets (never used of course).

an image of London Threatre before rebuilt as London Classic. View link
The current image (bottom) was built in the 90s with London Classic at the 2nd Floor.