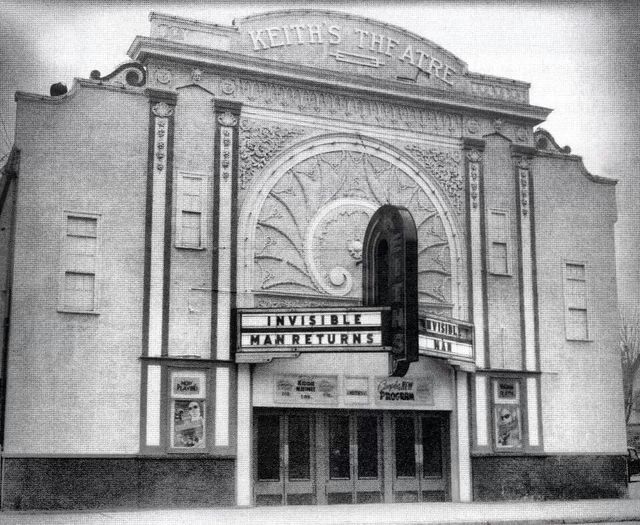 Keith’s Theatre in the Campello section of Brockton was a vaudeville house which became a neighborhood movie theatre. Further information welcomed.

The Keith’s Theatre in Campello was included in the MGM Theatre Photograph and Report project. There is an exterior photo dated April 1941. The house had a big impressive facade at least 3 stories high, with a center entrance. There were 3 pairs of double doors above which was a 2-sided triangular marquee, and above that was a vertical blade sign. It’s not possible to read what’s on left panel of the marquee, but the right panel has “March of Time” and “Enamelware”. Above the doors is a sign reading something like “Matinees at 2PM” and “Evenings at 7…”. There are rows of poster cases on either side of the entrance. The Report states that Keith’s is at 1030 Main St. in Brockton; that it has been playing MGM films for 4 years; that it’s over 15 years old and is in Poor condition (but the exterior appears to be in good condition); and has 550 seats on the main floor and 240 in the balcony,total: 790 seats. Keith’s and the Rialto Theatre, also on Main Street, were the only two Brockton theatres included in the MGM Report project. A friend, now deceased, who worked for E.M. Loew theatres from the late-1930s to the early-1950s, told me that around 1939 he and E.M.’s brother were sent to Brockton to inspect Keith’s, but I don’t know the final result of their visit.

The Keith’s was in a section of Brockton that had a sizable Swedish population, and during mid-week at least during the late 1940s, it showed exclusively Swedish language films. Otherwise, being somewhat apart from the main area of the city, it showed second or third run double features.

In the 1927 Film Daily Yearbook, under “Campbell Mass.” there is a Keith’s Theatre listed with 950 seats. I assume that they mean this theater in Campello.

Keith’s Theatre in Brockton was on a long list of theaters and halls in Massachusetts receiving licences for the 12 months ending Oct. 31, 1914. Other Brockton theaters on the list: City Theater, Empire Theatre, Hathaway’s Theatre, and New Orpheum Theatre. Plus some function/fraternal halls.

I was wondering if one of the one’s you names Ron is located at 866 Main St. The building still stands. I was in there about 20 years ago when it was a Karate school, but it had a balcony with the old wooden chairs still intact. The floor was cleared, but you could still see the marks from where the chairs sat. the stage was still there too. It currently houses a church, which from its website looks like they renovated the inside, but still would like to know what that was, since its where I grew up.

Also add the Building has the date 1923 on the front

I wish I could help you out, Don. I know that 866 Main Street is well away from downtown, but I’m really not familiar with Brockton. There’s a lot about Brockton theaters that I don’t know.

I googled 866 Main St. in Brockton and what I guess is # 866 is a 2-story white building; it has a multi-door center entrance with “… Tabernacle” posted above it. Yes, it sure does look like the entrance to a typical neighborhood movie theater.

I did some research with a local historian, he found the picture I posted (sorry pc was slow, so more than one picture.) Here it was.

The photo which DonMcKinnon has posted is very definitely the same theater as pictured on the MGM Theatre Report (photo taken in April 1941). That photo is a tighter shot mostly showing the entrance, but it is the same building, with the same marquee.