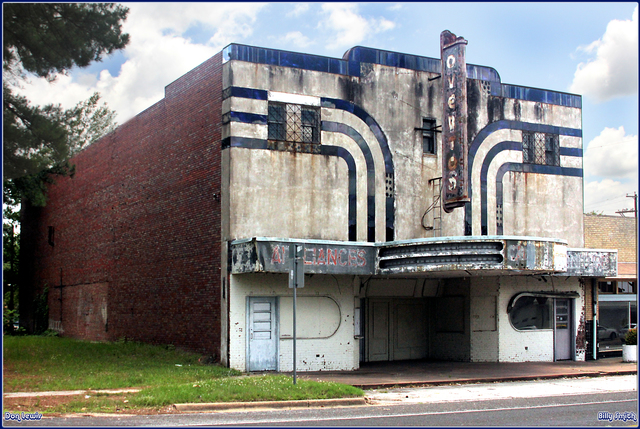 Now in use as a storage warehouse for the Davis furniture store which is located next door. The theatre was purchased by Loretta and John Posey, a husband and wife team who want to reopen the theatre. They think it will be about 2 years (around 2012) before it will open for movies, plays and dinner theatre and so much more.

Thanks Nick, for taking care of the story,Once again.

Looks like it will need a lot of work from the photos.

No obvious restoration efforts observed at this time. Photo taken 2014.

Art deco masterpiece. Marquee is wonderful and tile work too. Reminds me of the set done for the film House of Wax made about 10 years ago. An entire art deco small town with a movie theatre playing Whatever Happened To Baby Jane on a loop. Check it out. Such an artistic set and film. This great theatre should be saved.

Does anyone have an old photo of this theater in its heyday?

Hello Loretta and John, I live in Noonday and would be thrilled to help with the restoration. Ideally I will win the lottery and give you 200K to just giterdun but all I can offer is my services for free. I can do carpentry, sheetrock, electrical, plumbing, roofing, painting, come to think of it I’m a frikkin handyman. Not that it matters but we might even be related: my Gmom is the daughter of John Wesley Posey and Amanda Richardson—anyway give me holler. Anybody know a more direct way to contact them please post. rmcgehee at troupisd.org 5 7 4 0 6 5 0

1930’s photo added courtesy of Michael Brown, via the Vintage Neon Heaven Facebook page. The film on the marquee was released in 1932, so the 1938 opening year may be incorrect. Or it was a re-release.

The July 2, 1938 issue of Boxoffice said that Ted Lewis, of Texarkana, would open his new theater at Overton on July 8. The building was owned by local businessmen and Lewis would operate the house under contract. It would be in competition with the Jefferson Amusement Company, but the article didn’t mention any theatre names.

Jefferson might have had two theaters in Overton, as a November 15, 1941 issue of Motion Picture Herald mentioned houses called the Gem and the Strand there, though it didn’t name the operators. The two houses had enjoyed a 60 day clearance over the Overton Theatre, which an arbiter had cut to 14 days.