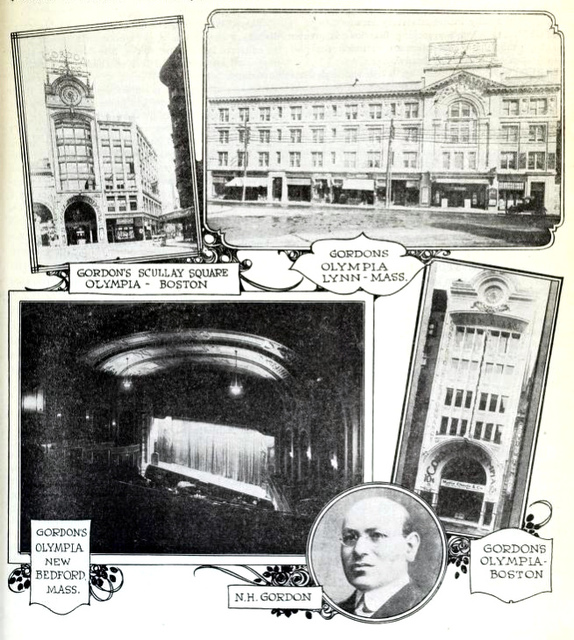 The Olympia Theatre was a large theatre in downtown Lynn, an inner suburb to the north of Boston. It was operated at one time by M & P Theatres, an affiliate of Paramount. Further information welcomed.

The Olympia Theatre in Lynn was included in the MGM Theatre Photograph and Report project. The form has an exterior photo dated May 1941. The theatre entrance was in the middle of a large commercial building at least 4 stories high. Above the entrance was a rectangular marquee with “Olympia” at the top-front in letters which probably had neon tubing. There is a large poster case on each side of the entrance with an elaborate frame. The Report states that the Olympia has been showing MGM films for over 10 years; that it’s over 15 years old; in Fair condition, with 1296 seats on the orchestra floor and 1240 balcony seats; total: 2,536 seats. The 1942-43 edition of the Motion Picture Almanac lists the Olympia, along with the Paramount in Lynn, as part of the M&P Theatres.

The Olympia was opened on January 25, 1908. It was a live theatre with films at first, and also was renowned locally for its Sunday afternoon concerts at which famous classical music artistes performed. A number of stars appeared there. Later, it featured movies only. It closed on October 7, 1952 and was then demolished to provide parking for Anthony’s Hawthorne Restaurant. This info is from an article about Lynn theatres written by Elmo Benedetto and found at the Lynn public library by CT member Barry Goodkin.

The Olympia is listed in the 1927 Film Daily Yearbook as having 2,300 seats and open daily.

A CT and THSA member has sent me a clipping from a trade publication called “The Film Index” dated August 21, 1909 which includes an exterior photo. The article states that the Olympia Theatre in Lynn, Mass. has reopened after extensive renovation and enlargement. It now seats 1,500. The stage was expanded; more boxes were built on either side of the stage. A steel girder was inserted to carry the weight of the balcony, so that the support posts under the balcony could be removed. New interior paint scheme was maroon and gold. The ventilation and heating were upgraded. A sign outside says “10 Cents- with Free Seat – Your Monies' Worth”. (Some movie theaters in those days had a base admission price, but you had to pay extra for a seat.) The photo of the entrance looks nothing like the outside of the theater as it appeared in, say, the 1930s- 40s. So it would seem that the theater must have been rebuilt and greatly enlarged later.