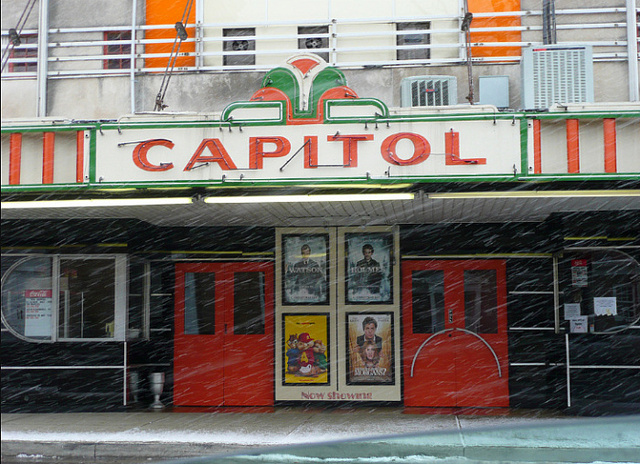 The Capitol Theatre opened in November 1939, replacing an earlier Savoy Theatre on the site. After a period of closure, it reopened in 1996 and closed in 2008. It was reopened in 2009.

Showtimes for this theatre are not online. It is closed?

According to Tribune Media Services, this theater is closed.

The November 11, 1939, issue of Boxoffice said that the Crescent Amusement Company’s new Capitol Theatre at Princeton had enjoyed a successful opening, the house being sold out in 30 minutes.

The Capitol apparently replaced an earlier theater called the Savoy on the same site. The June 3, 1939, issue of Boxoffice said that the Savoy Theatre had been closed on May 22 and would be demolished to make way for a new theater. Crescent had acquired the Savoy from Malco Theatres the year before.

The original theater on this site was the Savoy Theater. It burned to the ground in 1937. The Capitol Cinemas was built on the same site and opened in 1939. The Capitol was re-opened in 1996 and has been in continuous operation since that time. The web site for the Capitol is: www.capitolcinemas.net

Architected by Bruggeman, Swaim and Allen.

I watched the original Star Wars here. The updated screens are great.

Despite some community support and attempts to keep it going, the Capitol has closed for now.