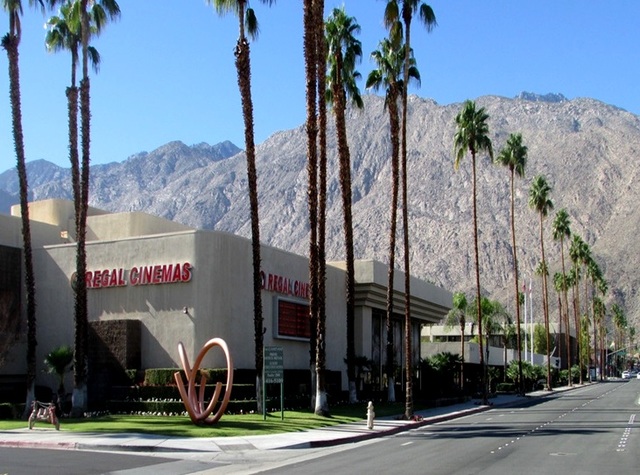 Opened as the Courtyard 6, and attended by Victoria Principle and Jim & Tammy Faye Bakker. Within three years after opening, an additional four screens were added, making it the Courtyard 10. It then became the Signature 10. In 2004, Signature Theatres remodeled the cinema, bringing the screen count down to nine. The 10th theatre is apparently now used as a meeting room. The Stadium 9 is one of the homes of the annual Palm Springs Film Festival, held every January.

Currently it is run by Regal Entertainment. The remodel on the cinema was amazing. It brought a simple unassuming cinema from the early-1990’s up to date, with new stadium seating, digital sound, and wide leather seats. The two largest auditoriums (#1 & #15), seat about 350 each, and have huge tall 50 foot screens with side masking. It is truly fantastic to watch a widescreen film in a way it was supposed to be presented.

The remaining two theatres (#8 and #9), are small intimate cinemas with large leather chairs set up with tables as well. It is a very nice screening room type. Even though the screens in these two theatres are on the small side, the presentation is always fantastic, and the intimacy of the theatre really works with those numbers of seats.

Last shows at the theatre tend to be at 7:30pm or earlier, but there are later performances on Friday & Saturday evenings.

It looks like nine screens according to the website. Did it lose a screen during a remodel?

Last month, Regal installed Sony 4K projectors in theatres #4, #5 (large house), and #6. I have seen one 3D movie and a regular movie with the new projectors on the large screen (50 feet, side masking). Although I am still not totally sold on digital projection, especially in a house like this that always had rock solid 35mm presentation with no scratches or splices, I did notice the sound was demonstratively better.

If you ever get to Palm Springs, this is the place to see a film (along with the Camelot)!

The remodeling of this Palm Springs multiplex for Signature Theatres was designed by the San Francisco architectural firm Uesugi & Associates.

September 18th, 1992 grand opening ad for the extension to 10 screens in the photo section.