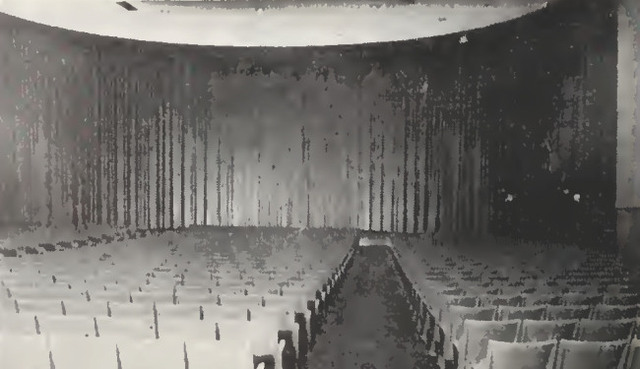 The Fox Theatre was just down the street from the Huntridge Theatre. It was opened March 5, 1965 with Jack Lemmon in “How to Murder Your Wife”. It was closed on March 30, 1998 with “Police Academy 5:Assignment Miami Beach” starring Bubba Smith. It was torn down to enlarge the Charleston Mall Plaza shopping center.

There just aren’t ENOUGH of those in Las Vegas.

The Charleston Plaza Shopping Center was located at 1800 E. Charleston Blvd. A July 1971 telephone directory lists the following stores within it:

This theatre had one of the best managers in the business, and he was also my dad. Richard Goldsworthy took the movie experience way beyond anything anyone else was doing at that time. From the “kid shows”, “Freaky Fridays” with my mom or me dressed up and lying in a casket, to the premiere of Annie, where the entire shopping center was tranformed with characters and propaganda that matched the show. My mom was the shopping center manager, Elsie Goldsworthy. I used to play all over the mall and theatre as a kid. Boy times have changed, my kids don’t have the freedom I did, and what a shame. I miss those old times, it is too bad that all that I have left is stories and photographs of the good times I had growing up. I am going to create a web page dedicated to my father with memories of the mall and theatre. Please email me if you have anything you would like posted when it is complete.

A photo of the original neon sign from 2009, found in the Las Vegas Neon Graveyard:

I remember Dick Goldsworthy;I worked under Gene Hendricks at the Boulevard Twin from January ‘79 til September '80, and had a lot of good times during those High School days.

To Scott Zimmerman: Yes, the Fox was torn down. BUT NOT “to make way for a shopping center” – the theatre was part of a new one called the Charleston Plaza Mall. At the time the theatre was built (1964), National General Theatres (the Fox’s original owner/operator) was in “expansion mode” (at the time, they wanted to build single screen theatres in shopping centers). The Fox was torn down because its last operator, Syufy Enterprises, felt it was no longer doing “business” for them. Sometime after the theatre was demolished, the whole mall was remodeled.

To Robert Goldsworthy: I tried to contact you, via your posted e-mail addy, but “no dice” on that. So, hopefully, you’ll read this message – I didn’t know your dad personally, but I went to the Fox on a semi-regular basis. Yeah, you are right about him – he was “the ultimate showman”. Even when the theatre played a “stinker”, that was his voice on the Fox’s telephone recording sounding enthused. Anyway, I have 2 stories about him, which I want to relay here: {1.} In 1973(? – I believe), Mann Theatres takes over the National General chain, and sometime in 1974, they do “the UNTHINKABLE” – they turn these theatres from nice, single-screen ones into ugly, “shoebox twins”. The exception: the Fox Cinemaland in Anaheim, Ca (which was located across the street from Disneyland – hence that theatre’s namesake). Mann turns that one, which probably was even larger than our Fox, here, into a triplex. Which, by all accounts, was described as “an abortion job”. Mann has plans to do the same thing to the Fox here. But your dad (God bless him) puts his foot down & tells the company something like “OVER MY DEAD BODY! You are NOT gonna ruin this theatre to make a profit.”

{2.} I saw the last movie the Fox ran – “The Emerald Forest”. Not long after the theatre closed, I showed up there to take one last look at it. (I knew that it was eventually gonna go “bye-bye”.) It’s my understanding that not long after Syufy took over the Fox (due to what I call “The Annie Fiasco”, which is a story in itself), your dad quit managing the Fox & focused on just managing the mall. Anyway, your dad came up to me & asked “Can I help you?” And I said, “No – I’m just having a last look.” He & I just stood there for what seemed like ages (probably just a minute or 2, actually), when I turned to him & asked “Why the hell did Syufy close this theatre down?” His answer was “They didn’t want to keep running it” or something like that. But whatever he said, the look of disgust on his face spoke volumes. That was the last time I saw him & the theatre.

I consider both The Fox AND The Las Vegas Cinerama to be the greatest movie theatres Las Vegas ever had – too bad they no longer exist…..

So it closed in 1986? Because I’ve been trying to find out when it closed.

I recall seeing an document kept by the Century Theatres' marketing team that suggested they operated the theatre from 2/9/1983-3/31/1988. I cannot vouch for how accurate this information is, but it’s a start.

Scott,you’re correct. “Police Academy 5” was the last movie to play there when it closed on March 30,1988.

To Scott Nieff - DON’T EVEN BELIEVE WHAT THIS RICH JR. IS TELLING YOU! So, tell me Rich - How the f… was it really possible that the Fox could show this “Police Academy flick in 1988, when the Fox closed/ceased operations in 1985, huh? For the record, the last movie the Fox ran was "The Emerald Forest” with Powers Boothe in July ‘85. After that first-run engagement, Syufy (who ran the theatre at the time) decided (in their so-called “wisdom”), to close it for good. Rich - I really don’t give a f… whether you were actually born here (Vegas) at Sunrise Hospital (whenever that was) or not. The point is - you DIDN’T grow up here (I did) - you spent the majority of your years living in So. California. So, for you to make claims that you know ANYTHING about Vegas movie theatres and/or what was shown here or not IS DOWNRIGHT WRONG & OFFENSIVE! And as far as I’m concerned, the powers that be here (IMDb) should really ban your ass with providing false and MISLEADING information. As a matter of fact, ANY site that has to do with movies and/or movie theatres that you participate in should ban you - PERIOD! Case in point, Scott - years ago when an expert friend of mine & myself came across this NIMROD, he BOLDLY claimed that, amongst other BOLDFACE LIES, that he saw “The Black Stallion” here (Vegas) at the Parkway Theatre in - get this - 70mm. So, tell us again Rich, how the f… was that really possible when UA (United Artists) NEVER RELEASED that flick in that particular format, huh? I REALLY DON’T GIVE A FLYING F… IF THIS SITE BANS ME FOR “A PERSONAL ATTACK” - I’M POSTING THIS REPLY AS A WARNING TO THOSE TO BEWARE OF THIS RICHJR. PERSON - HE OBVIOUSLY DOESN’T KNOW WHAT HE’S TALKING ABOUT - ESPECIALLY WHEN IT COMES TO LAS VEGAS MOVIE THEATRES! (You know Rich - I already warned you once, a long time ago, about saying things you don’t even know about. BUT NOOOOOOOO - instead of taking my advice & making some kind of effort to be careful in what you say/write, here you are being a TOTALLY DUMBASS MORON! “Oh yeah - the Fox closed with Police Academy 5 in 1988!” MY ASS IT DID!)