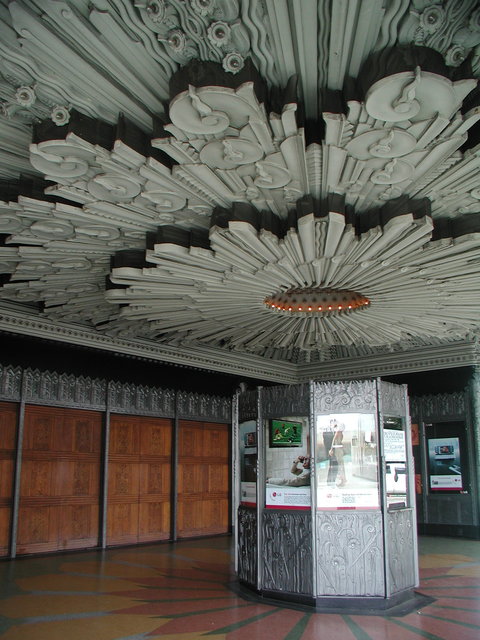 Dominating the corner of this busy intersection of Wilshire Boulevard and S. Western Avenue is the 12-story Pellisier Office Building. Construction began on this $1 million structure in October 1930. This magnificent steel-reinforced tower in a French Zig-Zag Moderne style, faced in blue-green terra cotta tiles is a sight to behold. It was designed by Stiles O' Clements of the prolific architectural firm Morgan, Walls & Clements and contains two wings of two storied shops which flank the building and also a parking space for 59 cars.

At the pavement level under the tower is the main theatre entrance, which is open plan and contains a central street ticket booth. The low ceiling made of moulded aluminum is enhanced by an elaborate play of lights on a sunburst motif. The theatre building was the final work of prolific theatre architect G. Albert Lansburgh and has a marvelous Art Deco decorative treatment by interior designer Anthony B. Heinsbergen. A graceful sweeping staircase in decorative metalwork dominates the oval shaped lobby which has wood panelling on the doors, murals on the walls and ceiling, from the center of which is hung a huge glass & bronze central light fitting. All this can be viewed from the ground floor level or from an open balcony that surrounds the lobby at second floor level.

Inside the spectacular Art Deco style auditorium the dominating ceiling feature is the huge decorative style zig-zag sun moulding, radiating beams in the shape of skyscapers. Silver painted stars circle this feature which is set in a yellow-orange coloured ceiling. The side-walls are decorated in narrow decorative mouldings topped by geometric elements which recur in the cornice and serve as the lighting trough to the recessed ceiling. The rectangular proscenium is flanked on either side by a large fluted column. On the original safety curtain is painted Heinsbergen’s Cubist-Deco representation of ‘Vision of the Heavens’ depicting a stylised waterfall, clouds and skyscrapers. The entire color scheme is in a mixture of soft tans, brown, yellow and burnished green.

Warner’s Western Theatre was opened on November 7, 1931 with George Arliss in “Alexander Hamilton” and was operated by Warner Bros. who took out a 50 years lease on the new theatre. It had a star-studded opening night premiere when, due to the City refusing to allow the streets to be blocked off at this busy intersection, a special wooden illuminated ‘Bridge of Stars’ was erected 16ft above Wilshire Boulevard to transport the attending movie stars across the street to the theatre, watched by a crowd of 100,000 fans. Among the stars attending were: James Cagney, Joan Blondell, Carol Lombard, Barbara Stanwyck, Norma Shearer, Clark Gable, Jean Harlow, Janet Gaynor, Charles Farrell, Joan Crawford and Marilyn Miller, with William Powell acting as master of ceremonies. The theatre was equipped with a huge Kimball 4 manual / 37 ranks organ which was opened by organist Albert Hay Malotte. The instrument was not a new one, as it had originally been installed in the Forum Theatre, Los Angeles, being transferred here ready for the theatre’s opening night.

Warner’s Western Theatre was not a success and it closed suddenly in mid-May 1933 with William Warren in “The Mind Reader” and Warner Bros. relinquished their lease. It reopened in April 1934 under an independent management and was renamed Wil-Tern Theatre, taking parts of the names of it location at Wiltern Boulevard and S. Western Avenue. After a short period Fox West Coast Theatres took control and gave it the name Wiltern Theatre. It was never considered a successful theatre, being too large for its location and having to compete for many years with Fox West Coast Theatres popular 1,800 seat Uptown Theatre (1925, demolished early-1970’s) located four blocks south on S. Western Boulevard at 10th Street.

In 1956 the entire building was sold to the Franklin Life Insurance Company of Springfield, IL and in 1968 the Wiltern Theatre was leased to Pacific Theatres chain who ran it until 1979 when it was closed as a movie theatre, by then running mainly Kung-Fu movies. The Kimball organ, which was still in a playable condition was removed from the building. Franklin Life then proposed to sell the building but were unsuccessful in finding a buyer and they then put in an application to demolish it, believing it would be easier to sell as a vacant lot. A strong fight was made by a local historical group and citizens to save the building, which was won at the ‘eleventh hour’ prior to the demolishers moving in, in November 1981. Unfortunately though, while the theatre had been ‘dark’ it had been vandalised and stripped of its fixtures & fittings. It wasn’t until real estate developer Wayne Ratkovitch purchased the building for $6.3 million in late-1981 with a view to restoration rather than demolition, that the future seemed brighter.

A sum of $9 million was spent on a magnificent restoration of both the Pellissier Building and the Wiltern Theatre, with an additional $4 million spent on the theatre to restore it back to its original splendour. The Wiltern Theatre reopened as a performing arts centre on May 1, 1985 with the Alvin Ailey American Dance Theatre. It became home to the Los Angeles Opera Theatre and has also been successful in staging concerts and shows.

In early-2002 word was going around that plans were being made for the theatre to be converted into a cabaret style club and nightclub and in June 2002 the Wiltern Theatre was closed. All the seating on the main orchestra level was removed to allow for a general admission standing space to be used for rock music concerts. Seating in the balcony remains in situ. It operates as a popular concert venue today, attracting big name headline acts.

The Wiltern Theatre is designated a Historic-Cultural Monument.

Los Angeles Historic Theatre Foundation will be touring the Wiltern on August 17th. Take a Peek:

1958 photo added credit Classic Hollywood/Los Angeles/SFV Facebook page. Has Warners and Wiltern signage, which would have been 2 years after Pacific Theatre’s chain took it over per the Overview. So they or Franklin Life must have re-exposed the Warners marquee signage during exterior changes.

The overview is mistaken. Stanley Warner sold its southern California houses, including the Wiltern, to Pacific Theatres in 1968. In 1958 Pacific was still a drive-in chain and did not yet have any hardtops.

Just posted a photo of what appears to be the Wiltern mocked up as the Brooklyn Paramount. Possibly for the Alan Freed film. Since I don’t see Paramount as any previous names for the Wiltern.

If you search American Hot Wax filming locations a link will come up with more photos. CT is mistakenly recognizing the link as spam so it won’t post.

Luis Valdez’s 1987 film La Bamba used the same exterior footage from American Wax of the Wiltern made to look like the Brooklyn Paramount for a concert scene.

Tried to post a link to the theatres in movies blogspot published in 2017 with photos but CT thinks it’s spam.

The Wiltern’s website has been changed and is now here

Season 3, episode 7 of the CBS show Tough as Nails featured challenges both inside and outside this theater, which looked great on TV.

Here is the above mentioned “Tough As Nails”-“Mic Drop” episode.