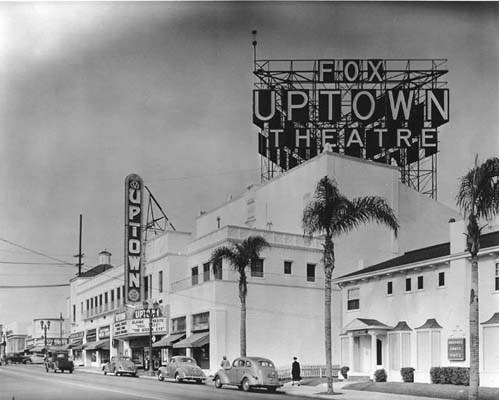 The Uptown Theatre was located at the southwest corner of S. Western Avenue & W. Olympic Boulevard in Los Angeles (six blocks south of the soon to be built Wiltern Theatre). It opened on December 29, 1925 with Norma Talmadge in “Graustark” and on stage were Charlie Nelso and his Playboys. It was equipped with a Wurlitzer organ. It was built and operated by the West Coast Theatres chain. It had 1,715 seats and was soon part of the Fox West Coast Theatres chain.

The theatre was last operated by National General Theatres and closed on October 23, 1959 with Vincent price in “The Tingler”. It was demolished in the mid-1960’s to build a Ralphs store. A Bank of America building stands on the site today.

Here are some additional photos from the LA Library:

hey ken that last photo looks an awful lot like the golden gate.

The middle photo from ken mc’s post from Aug. 5, 2007 is the Westlake Theatre in Los Angeles.

Sure looks that way. Nobody’s perfect.

The last ad for the Uptown in the LA Times is dated 10/23/59 for William Castle’s “The Tingler”. A March 1965 LAT item states that a new Ralphs will open on the site formerly occupied by Fox West Coast’s Uptown Theater. That would put the demolition in the early or mid 1960s. The Times does not mention the closing of the theater or its demolition, that I saw.

The demolition was done by the Cleveland Wrecking Company.

They also did the RKO Hillstreet and the Burbank on Main Street.

Here is a 1958 photo of the Uptown. It was in a term paper I found at an estate sale: