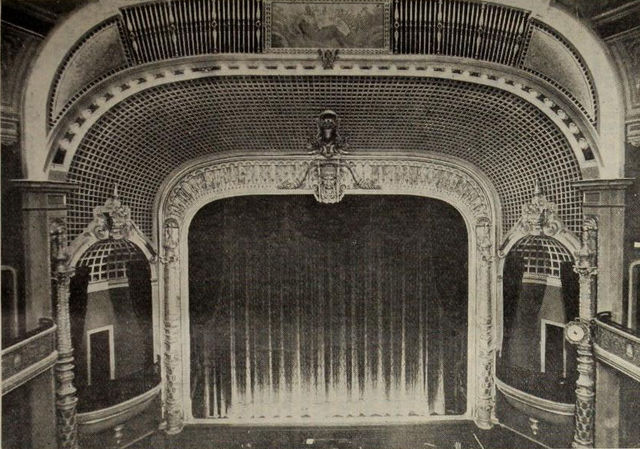 Horace A.W. Tabor, having made his fortune in the silver mines of Leadville, and having already built a great opera house there, moved his family to Denver, and immediately began making plans to build an even bigger opera house, one that would put Denver on the map.

No expense was spared. The finest woods were used for the seating and boxes, including Japanese cherry and Honduras mahogany, and the decoration was described as “Egyptian Moresque” by one local reporter. Three entrances opened into a rotunda, roofed with stained glass, 70 by 20 feet in dimension. Next to this area was the lobby, decorated with two immense mirrors, and a ceiling painted with frescoes. A large chandelier lighted the scene. The hallways and stairways were covered in rich Wilton carpeting of crimson, with a green border. Plush mohair seats and curved balconies faced the large stage, 72 feet wide by 50 feet deep, which was graced with a huge painted curtain. Seating capacity was 1,500. The ceiling of the auditorium was 65 feet above the floor. In the center was a circular dome 30 feet across, which was painted to represent a sky with clouds. The rest of the area was decorated with laurel leaves and other paintings and murals, in rich maroon, gold, blue, orange and black. Three tiers of box seats rose upward from the front of the auditorium, all of the seats covered with crimson plush. The walls of the interior were covered in wallpaper specially designed for the theater. The floors throughout were done in different woods, with parquet being the predominant style, and much of that was covered with thick Brussels carpeting. Most of the woodwork throughout the building was done in heavy paneling with occasional carving and gilding. Heavy cut glass globes covered the gaslights on all floors.

Aside from grand opera, the Tabor Grand featured light operas, plays, musicals, and played host to many charity balls, concerts and comedies. The All-Star Specialty Company, the Taborettes, and the Pantomime Carnival were among the early acts booked there.

The structure was remodeled considerably in 1921 to accommodate motion pictures. The name was changed to the Colorado Theater, and was changed back to The Tabor in about 1930. What, at the time, was asserted to be the largest steel girder ever installed in a public building, was put into place to hold up the weight of most of the balcony. The rest of the theater, from the lobby to the lounges, was decorated in the then-popular Spanish Renaissance style. Through the 1920s and 1930s some of the biggest names in entertainment played the house. Some were just starting their careers, such as Judy Garland, when she was a member of the singing Gumm sisters, the Andrew Sisters, and a very young Donald O'Connor.

Aside from the vast theater itself, the building held offices for architects, lawyers, physicians and dentists. Shops at street level sold everything from jewelry to shoes. The building was also home to a dance studio, art school and the Civic Symphony Orchestra, predecessor to the Denver Symphony.

The theater held its own during the heyday of the movie palaces, but like many, started to feel a pinch by the mid 1940s. It was sold in 1949 for $1,000,000 and the new owners made an effort to stage legitimate theater there, while struggling to keep up with the advent of television and the flight, by many, to the suburbs. Again known as the Tabor, it held Denver’s premiere of “Around the World in 80 Days” in 1957, and the following year installed a Cinemiracle screen, an offshoot of Cinerama, for the showing of “Windjammer”, the first film using the new process.

Plans were made as early as 1945 to demolish the building for offices, and it faced that threat again in 1961. After a futile attempt to keep its doors open by showing occasional second run movies, it was obvious that the old theater was too big and too costly, and it closed its doors for the final time. The Tabor Grand Opera House was torn down in 1964. The famous painted curtain was given to the Central City Opera House Association that same year, but it was too large to display. It went into storage and remained there for years, disintegrating, before being hauled to the dump. The former Tabor Grand property is now occupied by the Denver branch of the Federal Reserve Bank of Kansas City.

The Tabor Grand Theatre had a Grand Opening night of April 6th., 1929.

Denver’s complete CINEMIRACLE and CINERAMA exhibition history has been included in the “Remembering Cinerama” series and is posted here.

It must have been 1948, my friend Bob Leffler and I cut class at East High to see Sally Rand at The Tabor. The ticket was $2 and the show was a rip-off. The stage was completely dark, Sally had a huge white fan and a blue spot light. The theater was still grand. Downtown Denver looks little now like it did in the 1940’s, is it progress?

I work at a stone/monument company in Denver CO and we have a pair of the stone columns from the theatre before it closed. We have been in business since the 1920’s and acquired the columns along the way, they are beautiful and in great condition. Should anyone be interested in purchasing the pair please contact me directly.

Harry W. J. Edbrooke was not involved in the design of the Tabor Grand Opera House. He was only 18 years old when it was built. His father, Willoughby J. Edbrooke, was one of the architects, and his uncle Frank E. Edbrooke served as supervising architect.

The extensive remodeling of the Tabor Grand Opera House as the Colorado Theatre in 1921-1922 was the work of Denver architects Fisher & Fisher (brothers William Ellsworth Fisher and Arthur Addison Fisher.) Arthur R. Willet of New York was the decorator, but a number of Denver artists were involved in the project.

The rebuilt house opened on February 27, 1922, with the Colleen Moore feature Come On Over. The 71x134-foot auditorium had 2,526 seats, making it the largest moving picture theater in the Rocky Mountain region. The April 1, 1922, issue of The Moving Picture World described the house:

“With its remarkable $50,000 Robert-Morgan organ, its excellent concert orchestra — the largest theatre orchestra in Denver — its beautiful mezzanine floors, its marble staircases, its complete picture projecting equipment, its many entrances and exits, its colored floodlights, its fixtures and furniture, its lovely draperies and curtains, its mural paintings, its ushers in uniform and other interior splendors cause the Colorado to rank with the greatest theatres of New York, Chicago or California.”

Grand old theater, my mother was a Taborette and my uncle, Forrest Johnson played the organ, back in the Silent Movie and Vaudeville time at the Tabor Opera House. I have pictures and booklets, if someone would like to contact me. Sallie

Does anyone have a picture of the curtain showing the inscription at the bottom of the curtain? I am trying to confirm the full text: “So fleet the works of men, back to earth again, ancient and holy things fade like a dream”

rimelichar, Here is your quote: The verse that Tabor chose to adorn his grand opera house’s fancy decorated curtain was prophetic:

So fleet the works of men,
Back to the earth again;
Ancient and holy things
Fade like a dream.

Adapted from Harlan Jennings, “‘The Singers Are Not on Speaking Terms’: The Grand Opera in Denver: 1864–1881,”