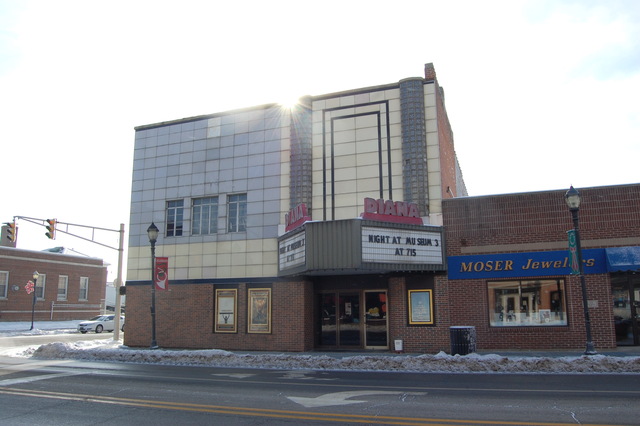 The theatre was rebuilt and opened again on April 26, 1948. The single screen Diana Theatre is a throwback to gentler and warmer times. Movies are selected with families and Tipton area values in mind. The theatre includes a crying room for parents of crying children to still watch the movie without bothering their seat mates. Twice a year, Christmas & Easter, the Paikos' family gives back to the community by treating the children and families to a free movie.

A full page ad for the Diana Theatre in the April 23, 1948, issue of The Tipton Daily Tribune said that the fire the previous year had virtually destroyed the old theater and building, and that the new Diana Theatre was new construction. The project was designed by the architectural and engineering firm of Johnson, McKinney & Schenck.

An article in the Monday, June 24, 1946, issue of The Tipton Daily Tribune said that Wednesday would mark the 20th anniversary of the Diana Theatre. Nick Paikos, the original owner, was still operating the house. The article said that prior to being remodeled and reopened as the Diana the building had housed the Grand Theatre, but that it had been closed for some time.

The Grand Theatre was mentioned in the April 1, 1922, issue of Exhibitors Herald, which said that it had been bought by Clyde Wilson. Previously it had been operated by Mr. and Mrs. Arthur Jackson.

Just to clarify, the prior theater was not owned by the Paoikos family until 1926.