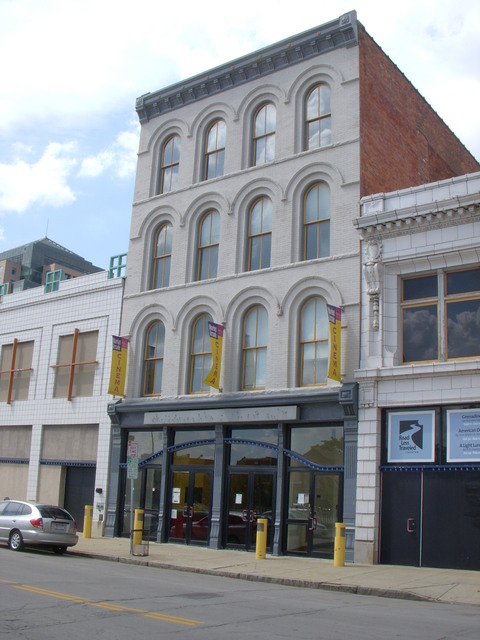 The Market Arcade 8 opened by General Cinema Theatres on December 18, 1987. In 2013, it was the last operating movie theatre in downtown Buffalo. It was closed by the Dipson Circuit in June 2014.

Following a refurbishment it was reopened by AMC on August 16, 2018. Seating capacities range from 126 down to 46.

Last place in town to see a first run show in 35MM! (Movieland is 5/8ths 35MM – – and everyone else is fully digital)

I visited last week for the BNFF and the theater is still in limbo – it’s in a strange predicament because the building is technically owned by the city, operated by a NFP-board and managed by Dipson. The city, wanting to get out of the exhibition business has requested proposals from interested parties to acquire the building (which includes the cinema and some additional storefronts).

Officially the city hopes it’ll remain a theater (and that could be viable as this block of Main Street is about to reopen to motor traffic), but it certainly requires updates including at the very minimum digital projection to continue to operate. (The lobby with its Angelika fixtures is generally in good shape, while the auditoriums are all original GCC including seats, carpeting and walls treatments – not in poor repair but certainly could use a refresh). I’ve heard some speculation as to the theater’s future, truthfully I’d like to see something innovative happen here (WNY doesn’t have a single luxury cinema and only one microcinema that serves food and alcohol).

This theatre should not close because the makers of Digital Projectors now lease them to theatres.

The theatre is currently closed. A new operator is being sought.

Slated to become an AMC recliner-plex due open by the Summer of 2016 (not sure what the hold-up is but Roads Less Traveled will return for another season in the building). I have mixed feelings on this one – on one hand its great it’ll remain a cinema, but it also may shut out the local film community as this venue held screenings for Buffalo Niagara Film Festival, UB’s Buffalo Film Seminars and other local screenings and premiers. On the other hand, it’s good news and I think the refurbished theater (Dipson’s hands were tied here) will be a success.

Sadly it’s still closed – it doesn’t appear that work has started despite the announcement AMC has executed a lease. (That’s only based on my observation of looking in from Main Street about three weeks ago). It’s a shame, this would be a nice compliment to the stores, restaurants, and hotels that have opened since this theater closed. The downtown area has seen positive growth and foot traffic with the addition of the Expo Market food hall next door. I do hope AMC is open to hosting / supporting local film and cultural events, although North Park has filled that void beautifully for many groups in town (along with Dipson Eastern Hills way out in the burbs)