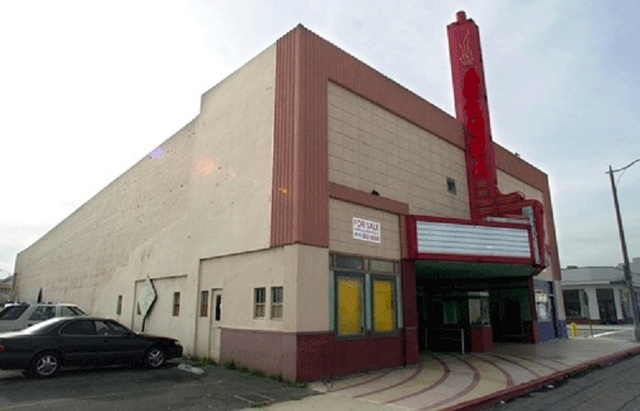 The Stadium Theatre was opened in April 1949 screening William Bendix in “Life of Riley” & The Bowery Boys in “Fighting Fools”. It and was a popular movie house until the 1960’s when falling profits forced a switch to X-rated films. Renamed Pussycat Theatre on July 11, 1969 with “Starlet”, it remained opened until 1991 and has been decaying ever since.

Recently a group formed to raise enough capital to buy and restore the theatre, but the City Council approved a plan to demolish it and replace the old movie house with new condominiums.

The council had earlier been given the group sixty days to finalize their plans.

Supporters had begun to raise money for its purchase, but finances were never resolved and the council, without any other viable alternative, granted Michael Mulligan Development permission to demolish the theatre.

The Stadium Theatre, like many of the area’s old movie houses, will now join other ghosts of Southern California’s past.

It’d have been better if they’d have kept the AURORA lettering and just named it Pussycat on the marquee, rather than destoying the original history.. what a great design!

The Pussycat Theatre opened with “Starlet”.