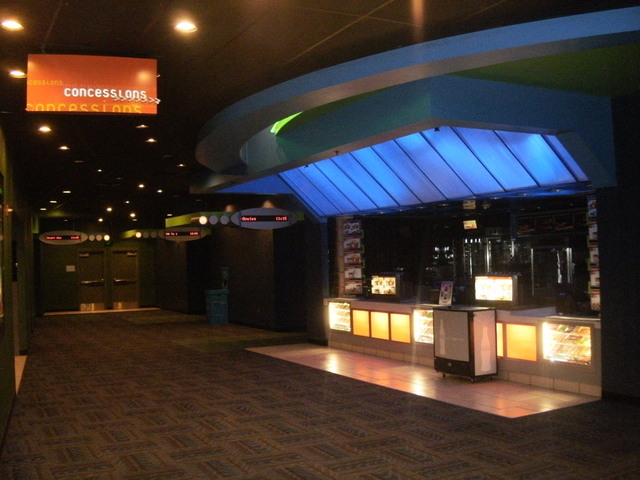 This 18-screen megaplex opened in 2004 and operated by Rave Motion Picture Theatres. It has DLP and Real D capabilities. In June 2013 it was taken over by Cinemark.

The North East Mall by Simon Properties was built theater-less opening in 1971. When the competing North Hills Mall was announced just a mile away to open in 1979, expansion in 1977/8 brought two new anchors and the mall’s first theater with the United Artists Northeast 6. The UA theater fulfilled its 20-year lease and moved on in 1997. The loss of UA actually propelled the mall into another expansion which would bring Nordstrom’s and Saks Fifth Avenue into the mall and encourage Foley’s to vacate North Hills for Northeast. In 1998, General Cinemas closed its North Hills interior cinema leaving an opportunity for a new-build megaplex.

Cinemark was first to the table announcing an 18-screen theater for North Hills Mall to open in 2001 and after delays it became a 16-screen concept to open in 2003/4 – part of an elaborate plan to resuscitate the moribund North Hills property that never took place. When Montgomery Ward’s chain was liquidated in 2001, an opportunity arose at North East Mall. A failed May Co. plan to build a Lord & Taylor in the Ward’s store would finally lead to a new theater for the area. Rave Motion Pictures of Dallas would open its third DFW facility as part of a 100,000 addition that included three restaurants.

The Design International architected theater opened November 10, 2004 just as the entire North East Mall had finally closed. The Rave Northeast Mall 18 theater’s screens were elaborately placed in three levels allowing for an eye-popping lobby and concession area. Auditorium sizes ranged at opening from 114 to 456 seats, seating with four feet of legroom between rows and 18-inch risers in stadium seating rows. The theater featured digital projection and 3D, including the first ever NCAA men’s final basketball telecast in 3D as well as live opera simulcasts and related Fathom live events. Rave also launched its digital signage network pioneering it at the Rave North East in 2011. Its 66 locations would take advantage of the signage as Rave had climbed to the fifth position in the movie exhibition U.S. by the end of 2012. The design flair of the North East fit the high tech circuit’s business model perfectly and gave the mid-cities its first modern-era theater.

The Cinemark chain acquired all of Rave’s properties in 2013 and divested the flagship Rave in Hickory Creek which was forced to rebrand under Carmike operation. But the North East and Ridgmar Mall properties would continue under the Cinemark-owned Rave nameplate. It would add the Cinemark-branded Xtreme “Big Screen Experience” as well as Indian Bollywood offerings. With the closest competition being a 25-year old sub-run discount house operated by Cinemark a mile away, the Rave North East 18 was well-positioned in the mid-2010s for a bright future.