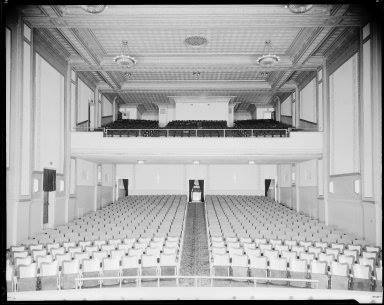 The Strand Theatre opened on February 26, 1921. It was remodeled by Fox Intermountain Theaters Inc. in 1950 and reopened as the Fox Theatre, closing in 1984.

It been reported by KCWY Channel 13 in Casper, WY that the theatre has been sold and being is renovated. The new owners expect to have the renovations completed by next summer. The owners say that the theatre will show live recordings of Broadway musicals, concerts and sporting events, in addition to movies.

Here’s a 2008 black and white view of the FOX: http://www.boxsetgallery.com/stein/index2.html

As of two weeks ago, the Strand still looks like the photo in the previous post. This was my first time seeing it in person. We stopped on our way back to California from Denver. I peeked in the front windows, and could see copies of the original blueprints tacked to a wall, one of them titled, “LONGITVDINAL SECTION.” It looks like the theatre has been largely gutted. The original blueprints show a rather typical and pleasingly proportioned interior, with traditional arched proscenium, organ fronts, maybe box seats (hard to tell), and assorted Neoclassical detailing.
A woman working at a gas station we stopped at at the far end of town told us that the project to renovate the theatre is still a going concern as far as she knows.
Old painted signs reading STRAND THEATRE are still evident on the sides and rear of the brick building. The stage has a fly tower and there are boarded up dressing room windows and a stage door visible in the alley behind.

The Strand theater construction began in 1919 and finished in 1921. Grand Opening was February 26, 1921. The Theater was designed by J. B. Hyder a Denver Colorado Architect for a Rawlins Business man by the name of J.P. Johnson. Mr. Johnson hired Larsen Construction to build his theater.