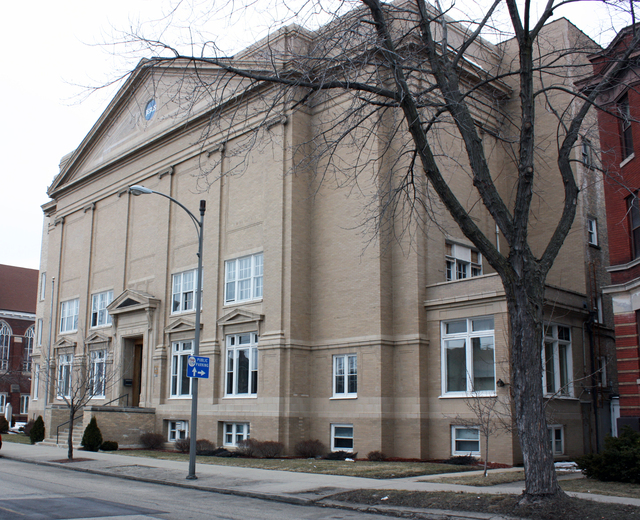 Not to be confused with the Temple Theater, the New Temple Theater opened in the Masonic Temple on Chicago Street in downtown Elgin in 1936, 16 years after the old theater burned down on Spring Street. “Modern Times”, starring Charlie Chaplin, was shown on opening night.
The theater was only in operation for a couple months before closing.

The building is still standing and is frequently used for special events.

Here are some recent exterior shots of the former New Temple Theater.

The building that housed the New Temple Theater was constructed using the Greek Revival style.

This building was recently bought by a church. About a month ago, the church ripped down the 85-year-old masonic compass symbol off of the beautiful Greek Revival facade about five stories above street level. They also ripped out the 1923 corner stone out of the side of the building which also included a masonic date. A time capsule was recovered behind the cornerstone but even after a month, a large hole still remains in the side of the building where it once was.

They replaced the compass symbol with a black and white thing that says “JESUS” on it. It totally does not match the light tan colored building.