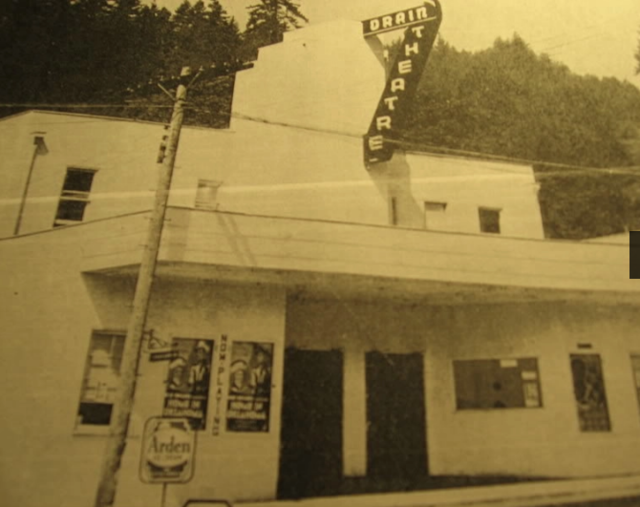 The Drain Theater was designed by Ted Francis for Golda Woolman in 1948. The 396 seat theater was completed for $39,000.

The auditorium structure was a Quonset design.

I never saw the Drain personally, but relatives took a couple of photos for me when they stumbled upon the theatre in the early 1990s. It was closed at the time. The photos I have show it looking just like it does in the old photo in the above-posted link, with one significant exception. The theatre had been given a new vertical neon sign, which, judging by its style, was likely added circa 1957.

The 1947-48 Theatre Catalog features a short write-up with three photos. In addition to the view in the above post, there is a photo of the little no-nonsense lobby, and a view of the simple, acoustic-panelled, vaulted auditorium, with rectangular proscenium and a small neon clock to the left of it, and a single exit door to the right.

In about 1969 my wife (then girlfriend) Cathy and I were on a camping trip and the Drain Theatre in Drain, Oregon was showing 2001 with MA AND PA KETTLE GO TO WAIKIKI. Now that is a trip!