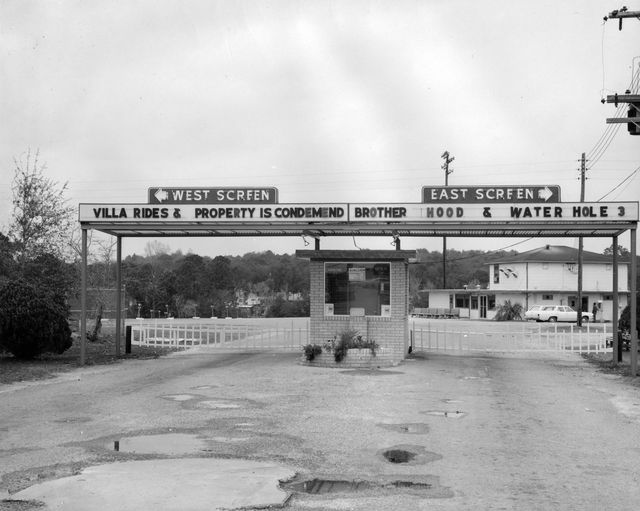 In 1972, T.G. Solomon, president of Gulf States Theatres, recalls “that when plans were first being made for Pensacola’s Twinair Drive-In there were only a few hundred open-air theatres in the country. I realized that drive-in theatres had a great future, and I began pursuing the building and purchasing of drive-ins in 1948 after forming Gulf States Theatres. The arrival of the baby twins on April 22, 1952, was a surprise, as we were expecting but one child. At that point, I decided to start building twin screen drive-in theatres rather than single screen ones”. At this time Gulf States Theatres were also operating the Palafox Drive-In.

The Tiwnair Drive-In was destroyed by Hurricane Frederick on September 12, 1979. The former drive-in site is now a water retention pond.

My parents lived about a quarter mile from the Twin Air…so I used to sneak in through the woods or hop the fence from Camelot Apartments…from about age 12…1973…till I was old enough to drive. It was destroyed by Hurricane Frederick in September 12,1979.

THE MANMADE LAKE TO THE NORTH OF THIS ADDRESS WAS THE DRIVE-IN!

FYI: When this was open, it was not on Navy. Shadow Lawn extended next to the drive-in.

When the Twin Air was open,the entrance was off of Navy Blvd.Shadowlawn ran sort of adjacent to the exit at the southeast corner.The exit had those one-way spiky things you had to drive over.I think the pond you’re talking about was more northeast than due north…and was on the grounds of the clay mining operation next door.The drive-in was definitely not in the lake.

I would love to know what is under that water.

This drive-in opened one day after the Ranch Drive-In.

All of the images posted indicate the name was Twinair Drive-In, with no hyphen in “Twin-Air”. Cinematour indicates 700 car capacity.