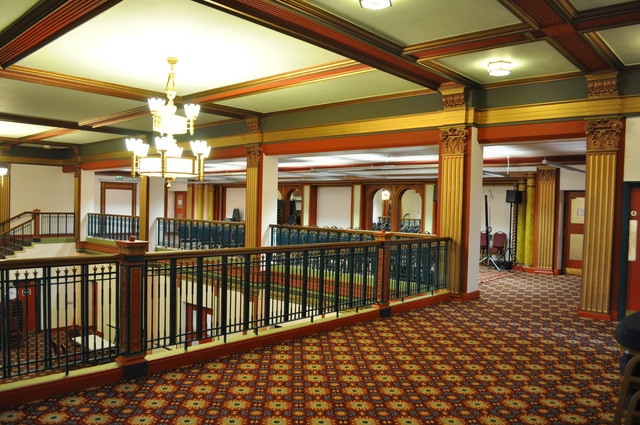 Located in the inner south London district of Battersea close to Clapham Junction Railway Station. The huge brick building which rises up high above the adjacent Clapham Junction railway station can been seen clearly from trains in and out of London. Opened as the Granada Theatre by the Granada Theatres chain on 8th November 1937 with Charles Boyer in “History Is Made At Night” and Neil Hamilton in “Mr. Stringfellow Says No”. On stage were Bobby Howell and His Band plus variety acts, while Donald Thorne opened the Wurlitzer 3 Manual/8 Ranks (with Grand Piano attached) theatre organ. The theatre was opened by the Duchess of Kent and film star Victor McLaglen made a personal appearance.

The architects Leslie C. Norton and H.B. Horner (in conjunction with Cecil Masey) created a magnificent building which has a prominent corner entrance on St. John’s Hill and Plough Road, the façade is in an Art Deco style. The lavish interior was designed by Theodore Komisarjevsky in an Italian Renaissance style. The whole of the ceiling was deeply coffered, and the side-walls decorated with pilasters, paintings and fibrous plaster. The front edges of the circle were stepped down in loges (three either side) Other facilities were a cafe, a small car park and a large fully equipped stage which was put to good use for many years and 18 dressing rooms for the artistes. The seating capacity was initially advertised as 3,005, but this was actually 2,475, making this the third largest of the Granada Theatres to be built (Tooting and Walthamstow were the largest).

From 21st June 1973 the theatre was tripled with 935 seats in the original balcony (using the main proscenium and stage) and two small screens with 191 & 187 seats located in the rear stalls under the balcony. The Granada Theatre closed on 5th July 1980 with “Zombies, Dawn of the Dead” in the main Screen 1 and “Pressure”/“Godfather of Hong Kong” and “Emmanuelle, Queen Bitch” being the closing films in the two small screens. The Wurlitzer organ was removed from the building in 1982 and now resides in the College Claparede, Geneva, Switzerland.

The building was de-tripled back to a single auditorium and it became a Granada Bingo Club, later in May 1991 it became a Gala Bingo Club. This was closed on 22nd December 1997 and the building stood empty and unused. Some damage was done to the interior not long after closing when an illegal ‘rave’ party was held in the building to which entry had been forced, and squatters then occupied the building.

In April 1998 it was granted a Grade II Listed building status which in August 1999 was upgraded to Grade II* Listed. There were several proposals for re-opening the building as a theatre, church, bar, etc., and even one to convert to office/residential/retail use, which would have meant virtual demolition, but none of these were initially approved.

Eventually approved was the plan to build apartments suspended over the building, with more flats to be contained in the conversion of the upper levels of the stage fly-tower. Phase 2 of the plans was the restoration of the auditorium and foyer for use as a church. The flats are named Lumiere House, and the church opened in the restored auditorium in late-2012.

Are Lumiere planing a screen here?

No – not as far as I am aware. I think they have “imaginatively” named the apartments Lumiere. The last I heard was that the cinema part, although due to be restored, did not have a tenant, but a church group was thought to be a likely prospect.

Yea thats what i had heard but my eyes nearly popped out when i saw that hoarding! Ah well!
Clapham could do with a screen that area.

Ken, I can see that you were busy snapping away during the CTA meeting last month. The CJ Granada is special to me as it was my local cinema during the 1950’s and 60’s when I lived in Battersea. I attach a link to my Flickr set which includes historic as well as photos taken at the AGM:

I have been involved with the Granada since moving to St.John’s Hill in 1994,and more directly, after it’s closure in Dec 1997.I have created a website dedicated to this extraordinairy building and detailing the ups and downs of it’s existance so far!

It is heartening to play a part in its current rennaissance – and to share the security it now enjoys for the foreseeable future.

I was an occasional visitor in my early years in the 1950’s. They ran Saturday morning kids shows – children only – you couldn’t take your parents! Sometimes they played the organ and we sang the Clapham Grenadiers song. The shows always started with a short cartoon – Mickey Mouse, Donald Duck, etc. Or perhaps Bugs Bunny or Sylvester & Tweety Pie. Next was an episode of a serial such as Flash Gordon – great stories, pity about the pathetic special effects! Occasionally they showed a newsreel, but often it was a comedy short – The Three Stooges, or Bowery Boys. Finally the main film. Westerns were very popular. Anything with plenty of action and not too much kissing! As a visitor from Devon, I found the London kids rather lively, but there was no really bad behaviour. Imagine the atmosphere when there was an exciting scene – all those kids shouting there support for the goodies and booing the bad guys! Those shows were really enjoyable.

the magnificent 3-8 Wurlitzer is installed in a school in Geneve Switserland. Not much used as so many great shame