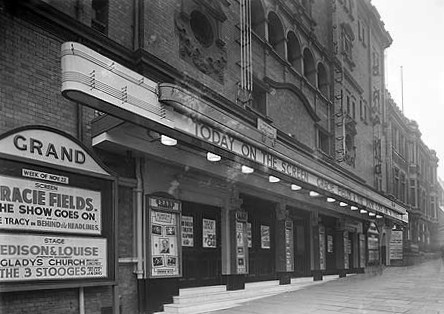 The imposing exterior features a Renaissance style façade which was carried out in brick and red Mansfield stone detailing. The interior of the theatre is decorated in a Chinese style with the ceiling being similar to the willow pattern plate motif. There are pagoda style canopies over the stage boxes and dragons eyes which lit up, peered down on the audience. Seating was in pit, stalls, dress circle and gallery and initially the seating capacity was for 3,000. The proscenium opening is 39 feet wide, the stage was 68 feet wide and 28 feet deep. There are nine dressing rooms.

In 1927 the theatre was converted for cinema performances and was known as the Grand Theatre, as it still staged mainly variety shows on the stage. Full time cinema use came on 13th February 1931 with John McCormack in “Song of My Heart” and Laurel & Hardy in “Angora Love”. It was operated by the London & District Cinemas Ltd. chain After World War II live shows were being staged again, but these were of the ‘nude revue’ type.

From 8th May 1950 it was re-opened as a cinema as it had been purchased by the Newcastle upon Tyne based Essoldo Circuit and was re-named Essoldo Cinema. The opening film was Spencer Tracy in “Adam’s Rib”. The Essoldo closed on 31st August 1963 with Ricardo Montalban in “The Black Buccaneer (Gordon, il pirata nero)” and Stephen Murray in “Master Spy”.

The building was converted into an Essoldo Bingo Club from 11th October 1963, later taken over by Classic Cinemas who re-named it Vogue Bingo Club. During their tenure they erected a false ceiling across from the front of the gallery to the stage, cutting the upper parts off from the main theatre. Mecca bingo were the final bingo operator in the building from 1972 until 1979.

The building remained empty until 1989 when it was purchased by the Mean Fiddler group to be opened as a live music venue, but licencing problems came up and it didn’t re-open until 17th December 1991. During closure the entire building had been redecorated and restored and the false ceiling in the auditorium had been removed. Mean Fiddler closed the venue on 20th July 1997 when it was purchased by the J.D. Wetherspoon pub chain. But they were refused a licence after a Public Enquiry and actors Corin and Vanessa Redgrave put forward plans to restore the theatre to live stage use.

Wetherspoons’s refused to sell the building for this purpose and it stood empty until it was eventually sold to the current owners Po Na Na group who have operated the building as a concert venue and nightclub since around 2001.

In 1978, the Grand Theatre was designated a Grade II Listed building by English Heritage.

A series of interior pictures – including the balcony projection room – taken in September 2008, just prior to a refurbishment:–