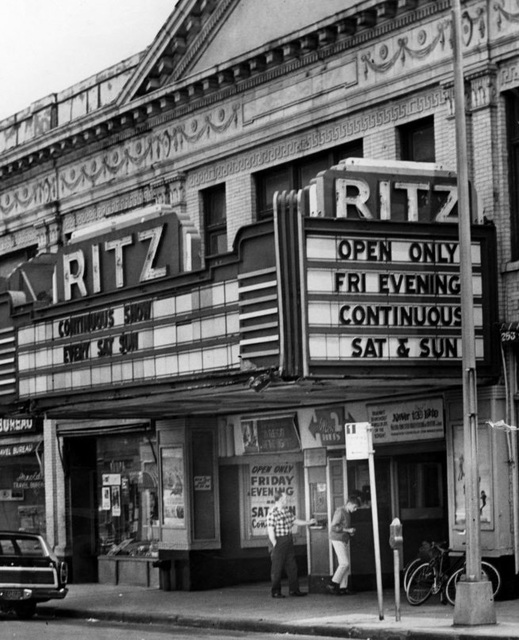 Located in the Port Richmond district of Staten Island. Built in 1924, the Ritz Theater later became the home of rock concerts and roller skating keeping the Ritz one of the integral entertainment venues on Staten Island for many years.

Since 1985, this theater has been owned and operated as a tile showroom by the Pedulla family. Portions of the theater’s original purpose can still be seen inside. The murals still grace the walls.

I saw many shows at the Ritz. My first one was front row right orchestra for MC5 and Iggy and the Stooges, Halloween night 1970. I was tripped out. Iggy walked off the stage after some jerkoff hit him with an egg. But man, did they rock….. I also saw Sabbath, Humble Pie, King Crimson, Cactus, Alice Cooper, Allman Brothers, Quicksilver, Billy Preston, Lord Baltimore, Savoy Brown, Long John Baldry, Fleetwood Mac, Dr. John, and Yes. Between the Ritz and the Fillmore East I saw some of the best shows in rock & roll history.

Did any bands play at The Ritz on Staten Island in 1969 ?

Cool memories! I only know about this theatre because of the architect (who I’m researching now). James Whitford Sr. He did several other theatre’s and his son did a few as well. Just thought I’d throw that tidbit out – I’m an architectural historian so finding out the architect of these amazing buildings is what I love! Thanks for the great stories!

Is there a list of all the acts that played there in the 1970’s ? I am particularly interested in late January-March 1970. Thanks

I saw Cactus play there in spring 1972. My 1st big concert. I met Carmine Appice recently and he remembered the Venue. Bring back the Ritz !!

Shame no one has taken pictures of the murals and other interior elements mentioned in the heading.

I was just there yesterday doing research for my blog www.startswednesday.com (this week’s post is about the Ritz when it was in serious decline, after it stopped being a theater). I took a peek inside what was once the auditorium and took some pix, but saw no murals…

I still have my ticket stub from a ritz concert. Cactus in ‘72. Jim McCarty and Rusty Day were not with the band anymore. Can I upload the foto of the ticket here? The price was about $5

Sorry, I saw Cactus there in 1972. Rusty Day and Jim McCarty were very much in the band. I was in the front row. McCarty played his Les Paul through a Fender Head with a 6 x 10" speaker cabinet. Just ask him, he is on Facebook and he is very polite. He would probably answer you.

According to the lead the murals are still visible. How come no one has taken interior pix?