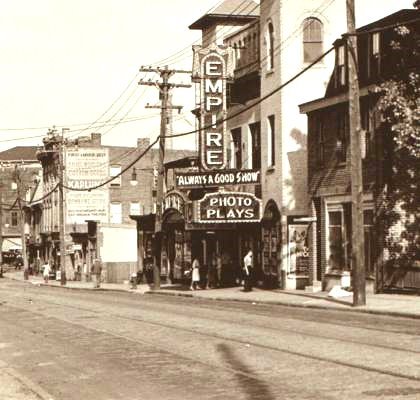 Located in the Port Richmond district of Staten Island. The Empire Theater was built in 1916 and closed in 1978. Two castle-like spires are located atop the theater.

Before its demise, it resorted to showing adult films, much to the dislike of the neighboring residents.

Farrell Lumber has owned the building since 1978 and used it for their supplies until moving out in March 2009. The marquee still hangs outside of the building and reads ‘FARRELL’. The projection room still exists.

Does anyone remember my grandfather, Harry Allen? He ran the place during the 50’s when women received free dishes and kids movies were shown. He was a great guy.

Farrell Lumber has closed its doors, and is now out of business. This occurred sometime around March 1, 2009.

Hi. Leo also had a storefront built on Port Richmond Avenue, located at 112-114 Port Richmond Ave – now ZAZA’s Thrift shop. His mansion once stood on the same site. Perhaps SI’s James Whitford is the architect? He was known for these types of buildings. I am involved with efforts to landmark its exterior. Th neighboring church- the Dutch Reformed Church is on the NY state register and nominated to be a city landmark. For more updates visit www.sitreasure.com/Blog

Maybe someone will resurrect it as a “dirty movie” theatre…..

Here’s an article from the S.I. Advance about the local theaters of yesteryear. The “Empire” is mentioned.

The other day I passed by on the bus. The doors were wide open , and it looked like the interior was vacant. The marquee is gone. I think someone bought it and may be preparing it for demolition….

The theatre has now been transformed into a church. The lower half of the facade has been renovated and there is now a set of wooden double doors at the entrance. I did not see any name of the facility, there is still a Farrell Lumber sign on the side of the building. Unknown if it has opened for services.