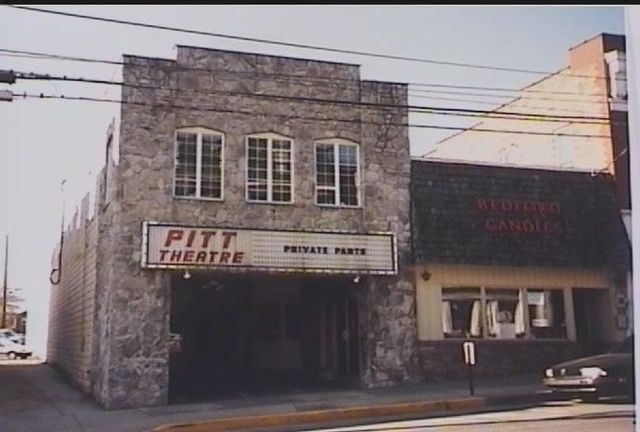 The Pitt Theatre has been in continuous operation since opening on March 6, 1939 with “St. Louis Blues”. It had a seating capacity of 654.

Movies are shown daily at 7:30pm in the 390 seat auditorium. There is surround sound. The theatre is willing to host private screenings, corporate events, birthday parties, and other special events.

The Pitt is open 7 days a week with one showing nightly at 7:30pm. I was there back in December 2006. The lobby area smells like gray floor and deck paint…the mens restroom is old and has been painted several times with gray paint.

The Pitt just came under new ownership… they have a web page now: http://www.pitttheatre.com/index.htm

I go there about once a month (I live near Bedford) and the new owners have added new things every time since they took over… surround sound, historical memorabilia as artâ€¦ Defiantly worth visiting!!!

Outside Owl…I made a trip from Harrisburg to the Pitt. I guess I will have to make another trip. Thank you for the update.

Here is another photo:
http://tinyurl.com/ms98qu

Here are all the unrelated photos on the same page. Happy hunting.
http://tinyurl.com/nde3dp

The December 17, 1938, issue of Boxoffice said that the Pitt Theatre would be ready to open in about six weeks. The architects of H.R. Cromwell’s new house were Joseph B. Smithyman and W.M. Braziell of Pittsburgh.