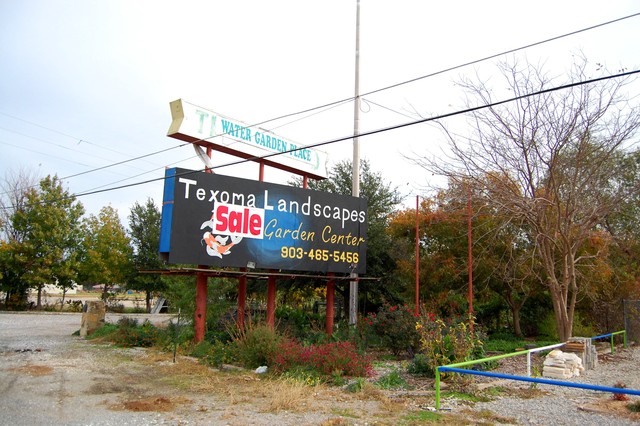 Twin City Drive In Theater was opened in the Denison City Limits by C. D. Leon June 17, 1947 on Breezy Hill, Highway 75 South, which is
now known as Texoma Parkway.

The old marquee is well camoflouged, but still standing, but the old
Drive in went down long ago.
Twin City covered 10 acres with a 42x31 screen.
Gordon McClendon who created Radio/1190 KLIF at Dallas purchased the theater in November, 1970.
McClendon’s firm Southwest theaters operated several in Oak Cliff at
Dallas.
He had originally taken over for his father, the real businessman, but got the credit.
Twin City closed in 1976, and C. D. leon came rolling back reopening
the theater in 1977.
John Atchley’s B & B Theaters bought the Twin City in 1980, but in
1984 the old showplace went permantly silent.
I spent many wonderful hours at the Twin City, and manager Sparks ran my friends and i out of the place many times after we had sneaked in with him watching, but he was a real gentleman giving us
free tickets to get in a number of times.
Dave also posted the City Drive In on CT, but this is the place he
described.

One other thing about the Rwin City, it has always been known as a Sherman Drive In, but it was in the Denison City Limits, and much closer to Denison than Sherman.
Just want Denisonian' happy.s

I was manager of the Twin City in 80-81 under John Atchley.

TWIN CITY Drive In Marque is all that is left. Seen Here:.. View link .. I was told that some of the Snack Bar still stands but if so, you can’t tell it from what I saw..
Randy A Carlisle
Historical Photographer
RAC Photography

Approx. address for this drive-in was 6321 Texoma Parkway. A couple of ramps are partially showing.

Millsbranch- you spoke about Manager Sparks in one of your comments, he was my great grandfather! I am actually doing research to find out more about his early career. I just wanted to let you know that I found it very amusing that you remembered him after all these years. He retired in 1971 or 1972

Robert D. Sparks, manager, Twin City Drive-In, Sherman, Tex., offered $20 cash for the best name submitted for the gigantic but “friendly” bull painted on the front of that theatre. The Twin City has just completed a big remodeling and redecorating job. Just about the world’s biggest bull was next done in oils on a surface measuring 40 x 50 feet. The scene is lighted up at night with floodlights.