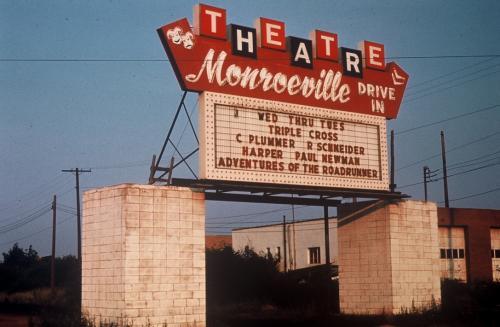 Opened August 11, 1960. Built alongside the Pennsylvania Turnpike, near the Northern Pike interchange. This was one of several Pittsburgh area drive-ins to close after the 1986 season. There is nothing left of the drive-in, but the sign and signpost remained at the turnoff on Northern Pike for years after its closing. Both signs are now gone as well.

“Dawn of the Dead” was filmed at the Monroeville Mall …does anyone know if “Dawn…” played at this Drive In ??

The drive-in listings at View link
does not have a grand opening ad for this drive-in.

have a memory of only one visit to this theater. went to see A HARD DAYS NIGHT and I think that would date it at late summer 1964. [btw even my Mom liked the movie]

I grew up in Monroeville, but was a bit too young to remember this theater. In the early 1990s I worked at a Chinese restaurant(Chin’s Polynesian Garden) on Northern Pike, and right across the street was an old cast aluminum street sign for Drive-In Theater Lane. This was the main driveway for this theater from what the old timers told me. On the little map you can see this road as a little dead end spur about an inch and a quarter to the right of the red place marker. In the late 1980s a lot of development happened on Mosside Blvd. across from the Gateway High School. A self-storage place was part of this development and the lower units took the place of the theater and screen.

To expand on jwmovies' comment on location…According to the newspaper listings, the original entrance to the drive-in was, in fact, on Mosside Blvd/PA 48. The listings also showed the drive-in as “around the corner from Kaufmann’s” (coincidentally the former site of the Pittsburgh Drive-In that closed the previous year) and “Parkway East 22 Exit 16 — stay on 48 South”

By 1972, the entrance was relocated. Instead of staying straight on PA 48 South, patrons turned left onto Northern Pike, then right on Drive-In Lane (before the entrance to the former Westinghouse Energy Center) and down to the box office.

The July 23 edition of the Post Gazette first showed the drive-in’s new (and final) designated address of 4340 Northern Pike.

Forbes Hospital now occupies the former drive-in site. The “Drive-In Lane” off Northern Pike is still there but it’s a dead-end now.

The entrance was on mosside blvd in 1971 when I went to see the movie Shaft, I think it moved down to Northern pike the next year. I remember taking my pickup truck there and backing it in and sitting in the back of it, I had a big school gym mat in the bed of the truck bed for a cushion. I also remember they used to show 3 movies a lot of the time. The food wasn’t that good, we usually brought our own food and drinks. I went to different drive in,s back then, but I usually went to the Greater Pittsburg or Ardmore drive in,s. Still hated to see it close down, just like so many other drive in,s.

A more accurate address for this theater is 4346 Northern Pike, Monroeville, PA 15146. This points to Drive In Lane. Drive In is a dead end because of EZ Storage at my previous address. The theater itself is now satellite parking for the hospital.