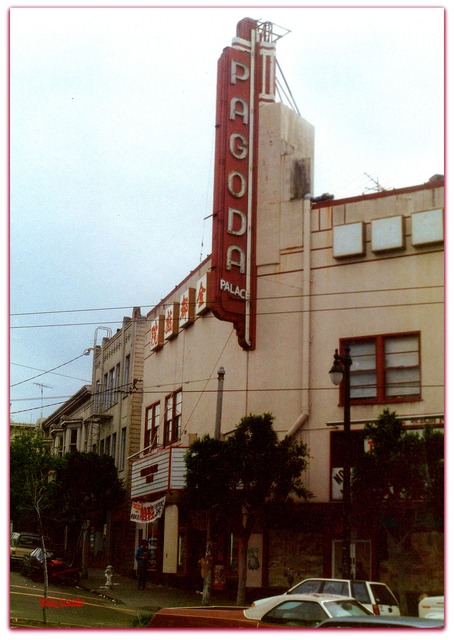 Opened as the Washington Square Theatre in 1909.

The building was demolished in August 2013.

I loved the Palace. The marqueee had “two big hits” with chinese pictures playing there. In 1985, I believe, we went there and saw the film Picnic with Kim Novak, and she appeared onstage for a interview. But the best times was in the early 70’s with the midnight shows on the weekends. It was funny when the theatre emptied out from the chinese customers on friday nights, they were met by crowds of people waiting for midnight show, all dressed in drag and other costumes. Big celebrities showed there for those screenings, like Peter Max, Truman Capote, and Tony Curtis. I wish i would have been there when Bette Midler showed up, I understand she did quite a few times in those days. The one time I will never forget was when Janis Joplin came in there stoned higher than a kite, sang on stage with a band called the 13th floor elevators. She stumbled down the stairs and her friends carried her out. Went there for many a movie, big screen, great sound, and comfortable seating.

I was the Theatre Manager of the Pagoda in 1986 not long after Alan Michaan took it over for Renaissance Rialto. At that time R.R. was booking it as a daily rep house with 2 new films each day. It was an amazing experience to be a part of the theatre’s history. Unfortunately due to high rent, lack of parking, numerous other Rep houses in town at the time, and other factors, the theatre just wasn’t making $. They started booking full week runs, which, depending on the film either did very well, or really poorly. Out of desperation they booked a live Chinese Opera there for a week run. It was interesting, but a complete nightmare as a manager. There was a tiny room next to my office which had 100’s of film reels from China. There was a rental apartment above my office which was attached to us by a spiral staircase. There was also a series of, what appeared to be, dressing rooms, that had not been used in decades. Very creepy to wonder around in these at night. Despite many crazy times there, I have wonderful memories of the Pagoda.

A 1937 remodeling of the Milano Theatre was the work of architect A.A. Cantin, according to Architect & Engineer of April, 1937. The theater had suffered major damage in a fire, and the rebuilding was expected to cost $25,000. 1937 was the year the house reopened as the Palace, according to Jack Tillmany’s comment near the top of this page.

DOES ANYONE KNOW THE NAME OF THE THEATRE IN “The Laughing Policeman”. SHOT IN San Francisco.

Mikerogers, the theater in the movie Laughing Policeman was the Victoria on 16th Street. Back then, it was a burlesque house. The Palace was a nice theater, the last movie I saw there was a chinese horror film called The Chinese Ghost Story. The inside of the Palace reminded me of the Noe Theater, the lobby, phone booth, and the womens lounge were all in the same spots, looked the same, except the murals were different. There was this huge gong on the right of the stage, and before the movie started, this cute elderly lady that worked the snack bar, walked on stage and hit the gong. Then the drapes opened and the movie started.

The SFMTA demolition notice stating June 27 as the start date.

Status should be sadly changed to demolished. According to today’s San Francisco Chronicle, the walls were torn down Monday morning.

Re: the Curtain-finally-falls article linked above- it left me with the impression that the theater was now a pile of rubble when I saw the article online earlier this morning. The blade is not being torn down Wednesday as reported. It’s gone today. The “walls” Nevius refers to are the Powell St and Columbus Ave walls on the front of the building. The auditorium walls are still up including the back wall with stairway and bathroom exposed. A demolition worker at the site said it would take about a month to demolish the whole theater and cart all the debris away. I posted a couple photos of the demolition that were taken today.