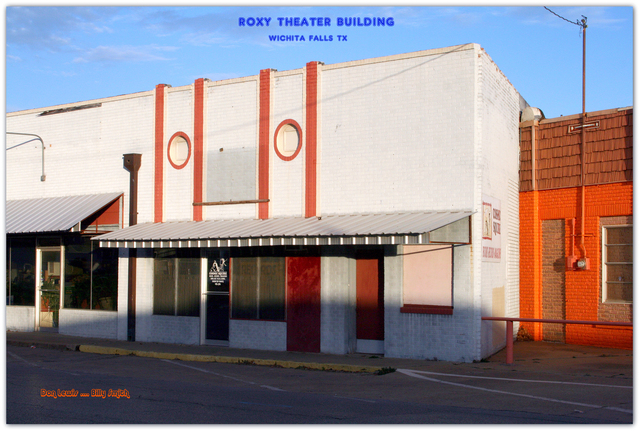 The Roxy Theatre was opened February 13, 1938. After a period of closure, it reopened as the Linda Theatre on February 14, 1949. On September 14, 1954 it was remodelled as the Coronet Theatre, but this was a short lived venture and it was closed in 1955.

The building was used by the Wichita Falls Civic Playhouse and the North Texas Center for the Arts. It is now an antiques mall.

Boxoffice magazine reported in April 1962 that the Parker Square Theater in Wichita Falls was slated for demolition. It opened in 1958 and lasted just three years before being converted to a department store.

No, the Parker Square and the Roxy were two different places. The Roxy would have been in the neighborhood north of Kell Boulevard somewhere in the vicinity of Zundelowitz Jr. High School. Parker Square was entered on the south side of Kell somewhere west of Taft Street. I was a regular attendee of the Parker Square Theatre up to 1962. Like the rest of the shopping center it was built to cater to the Country Club district. This was before Sikes Center. I don’t recall the Roxy at all, so it may have ceased operations before the late 1950s when I became an active moviegoer. What Department store later occupied the Parker Square Theatres space? I think there was already a McClurkan’s in the center. Perkins Timberlake perhaps?

I’m going to add the Parker Square, since it doesn’t seem to be an aka for any of the theaters in Ken Roe’s list of 9/21/07.

Maybe what killed the Parker Square was the fact that it was a single screen house. Seating capacity was around 600, maybe bigger.

According to this obituary the former Roxy was until recently the home of a used book store called the Cosmic Squire.

The owner of the Cosmic Squire Book & Music store died in Nov. 2009 and the family was considering selling the building or they may already have done so.
There are a couple of pictures on the Wichita Falls History Facebook page. I remember going to the Roxy and actually saw a silent movie there with my grandmother in the early 1940s. Don’t know why they were showing a silent movie since they showed sound films all of the time. The WF History Facebook page is great. I’ll be telling them about the Cinema Treasures website.

From 2011 a photo of the Roxy Theater Building in Wichita Falls.

On the Wichita Falls History Facebook pages, Julie Coley who used to run an antique store in the old Roxy Theatre building posted a recent article from the WFTimesRecordNews that a man in Wichita Falls has bought the entire strip and wants to restore all of the buildings as to their outside facades. That would be great to see.
Jeanette Crumpler in Dallas, TX

BTW Julie has a picture of the Roxy Theatre on her Photos page of the WFHistory Facebook website. I’m so grateful for her and for Don Lewis too in preserving much of the past.
Jeanette Crumpler in Dallas, TX