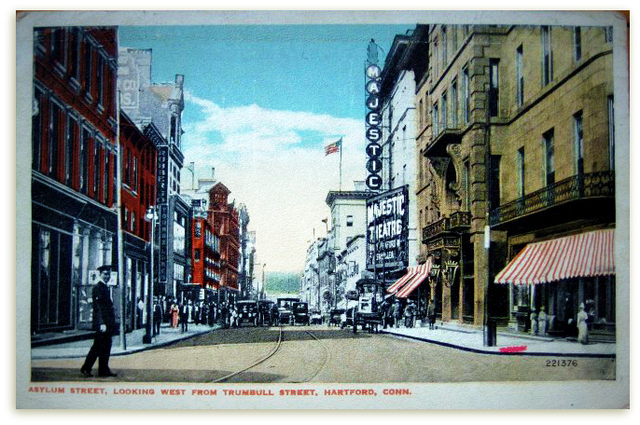 Opened February 8, 1915 as the Majestic Theatre it was designed by noted theatre architect Thomas W. Lamb. It was taken over by the E.M. Loew’s Theaters Inc. out of Boston and renamed E.M. Loew’s Theatre from March 22, 1930. The theatre was located on the second floor of a building and the lobby on the first floor.

It was still open in 1960, but like many of Hartford’s old movie palaces, it has been demolished.

To add to Mr. Katz’s and Mr. Rossetti’s descripion of this theater, the construction was unique in that both the main entrance and backstage faced Asylum St. This meant, not only did one have to go upstairs, but they also had to walk the total length of the theater in order to enter the auditorium. Of course, the balcony was another flight of stairs.

In the “Images of America” book Hartford, Volume II, on page 52, appears a 1960 photo of the theatre along with the nearby Allyn. Hard to read what was on the marquee at the time. The E.M. Loew’s would be be razed in 1970, along with its neighbor the Allyn, in preparation for the construction of the huge Hartford Civic Center.

Nice shot of the marquee and vertical, what about the address Asylum Street.

An unusual booking for E.M. Loew’s in April 1950 was the Italian film The Bicycle Thief. The house did not normally show foreign-language films.

Elias M. Loew 1898-1984 once owned 70 theatres and 17 drive-ins, a chain of hotels and motels,one being the Gulfstream Drive-in that had a motel built on both sides of the screen it has its own page on C.T.

From 1929 a postcard view of downtown Hartford along with the MajesticTheater.

Constructed within the four walls of a commercial building that had been gutted by fire, the Majestic opened on February 8th, 1915, with photoplays only. The cinema operated as the Majestic for nearly fifteen years, but the conversion to sound bankrupted the owners, who sold the operating lease to E.M.Loew. After some renovations, the theatre re-opened as E. M. Loew’s on March 22nd, 1930. “Majestic” was scrapped, and never attached to the new branding.