Aetna Theatre at the Wadsworth Atheneum 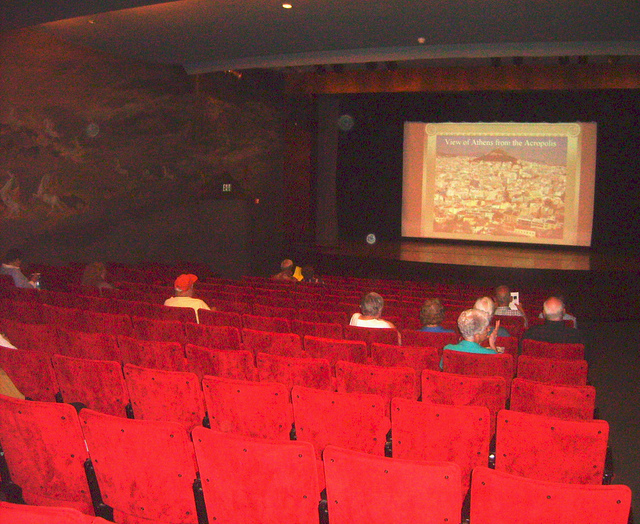 For many years the Wadsworth Atheneum has been presenting excellent film programs for the discriminating viewer. The emphasis is on international cinema of recent vintage, both released and yet-to-be-released films.

The theatre itself is a lovely Art-Deco style jewel that has been used for concerts, films, and other events. The staged premiere of the the Virgil Thompson opera "Four Saint in Three Acts" took place here in 1934. By 1945 the Avery Memorial Theatre was screening movies. It is a wonderful characterful place to see a movie in Hartford, a city which is blessed with more alternative cinema than most cities its size.

The cinema is located in the lower level of the museum, off a wonderful lobby decorated with murals. A secondary entrance to the museum from Grove Street leads to the stairway or elevator which take patrons down to the theatre.

Oh yes, Warren, you are absolutely right and I rue that sad fact every time I come to the city from my Providence area residence. I was there on Sunday for an Italian movie at the Aetna. Right across from the Wadsworth Atheneum there used to be two great movie palaces, almost side by side, the Loew’s Poli and Loew’s Palace. Up a few blocks was the Strand. The Allyn and E.M. Loew’s were destroyed for the building of the misconceived and monstrous Civic Center. The Princess and Regal bit the dust in an orgy of “renewal.” I never went into those movie palaces or mini-palaces, but I remember driving by almost all of them on my way to other places in the early 1960s, when I wasn’t really interested in theatres per se, only in movies, which I generally saw near where I lived in Rhode Island. The only movie theatres I’ve visited in Hartford are the Rivoli when it was an art house, and the Art Cinema when it was indeed an art house. Both are on the outskirts. The Rivoli is gone; the Art remains as a porno house. The Lyric on Park Street, a few blocks from the state capitol building, does still stand, shuttered and decrepit. If one of the great movie palaces like the Poli or Strand had survived, it could have today been used for touring Broadway shows instead of the Bushnell Auditorium. The Bushnell is more properly a concert hall and I feel it should have been used exclusively for musical and operatic events. Never a movie theatre, the Bushnell has quite an eye-popping interior though. At least this survives, and the new smaller auditorium next to it is a pleasant concert venue. In Providence we have the magificent former Loew’s State, now the Providence Performing Arts Center. That was a real preservation success story, though most of our other palaces were razed or gutted. Hartford had no movie-palace success story, not even one.

Just to give an idea of the kind of film programs offered at the Aetna, I will list the films being shown the current 2007 summer film program: The Lives of Others, Sounds of Sand, The Great Match, The Rape of Europa, The Missing Star, The Iceberg, The Namesake, DarkBlueAlmostBlack, Kontakt. Additional films include outdoor screenings of two classic American films: The Awful Truth and the 1922 silent western Big Stakes, with life musical accompaniment by the Devil Music Ensemble of Boston.

The Aetna Theatre at the Wadsworth was previously known as the Avery Memorial Theatre.

Preview “House” Spy Film
HARTFORD – Members of the Wadsworth Atheneum, the press and the local theatrical fraternity attended a preview of “The House on 92nd Street” at the Avery Memorial Friday night. Lou Cohen, manager of the Poli, was host. Both newspapers carried preview “box” announcements on the theatre pages, tying in with current history on the atomic bomb and serving as special advance exploitation on the film.

At one time operated by CATE Enterprises Circuit.