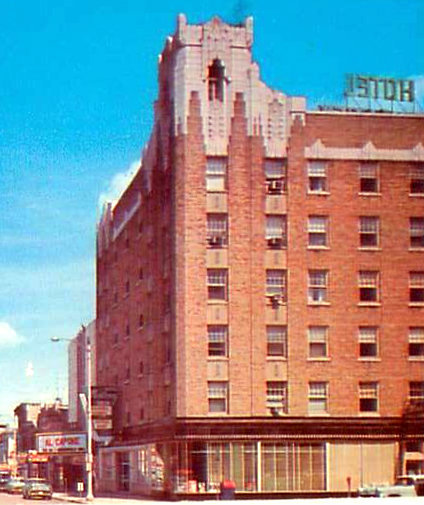 The Jeffris Theatre was opened by Saxe Amusements in 1924.

This theater is currently being demolished to provide parking for the old hotel next door which is being renovated. Asbestos abatement has held up the demolition for a while.

The main auditorium was torn down this year. They needed the space for a parking lot for the old hotel next door. My understanding is that the theatre lobby and entrance is still intact along Milwaukee Street. The two small theatres that are over the lobby may also be still there.

The local historical society has a narrative of the Saxe Brothers Jeffris Theatre which relates a fatal collapse and a hypnotist who convinced a person to sleep 24 hours a day for a solid week in the front window of the Leath Furniture Store.

The Jeffris Theater was completely remodeled during 1937.

“The Robe” in CinemaScope played there after the Jeffris installed a wider screen and a new stereophonic sound system on or about February 10, 1954.

In 1965, the Kingston Trio performed at the Jeffris Theater.

On February 21, 1966, a suspicious fire gutted the lobby of the Jeffris Theatre and sent smoke into the adjoining Monterey Hotel, asphyxiating a resident.

The theater reopened September 2, 1983 as the Ormson Cinemas 1 & 2, and then was bought by a Marshall Field company which reopened it as the five-screen Park Place Cinema.

Photos exist of the Jeffris Theater in 1943 with a large crowd lined up at its entrance. Buying a war bond during the 1943 World War II Bond Rally was the price of admission to the Jeffris' feature movie, “Sonja Henie in Wintertime”. There’s a 1943 photo of the lobby of the Jeffris Theater with three female ushers on duty near the candy display (Richard Haney, photographer), and a circa 1940s photo of the interior of a 3-man stage act including a fiddler, a guitar-player and a man playing a washtub (thought to be Walter LaVeen).

After years of vacancy and local indecision, demolition ended the Jeffris' long story.

James Zanias, 72, Janesville businessman since 1908 and coproprietor of Central cafe, was found dead in bed in his room at 203 Center avenue at noon Saturday. Mr. Zanias had worked Thursday and returned to his room at midnight. While he had not complained of being ill, Mr. Zanias had suffered with a heart ailment for several years. He had planned to return to his native Greece in January to visit relatives.
Having learned something of the confectionery business in Chicago Mr. Zanias took his first job in Janesville with the Candy Kitchen, now Homsey’s, when he located here in 1906. Two years later he purchased a part interest in the business, Gus Vlachos being his partner.

The two men became interested in the new entertainment medium motion pictures and in 1908 they opened the Lyric theatre, a 5 and 10 cent show at 113 W. Milwaukee street. Business was so profitable that Mr. Zanias purchased the Nickelodeon theatre at 210 W. Milwaukee street in 1909. By 1911 Mr. Zanias had bought out his partner’s interest and sold the confectionery store to the Homsey brothers.
Expanding his theatrical enterprises Mr. Zanias became manager of the new Apollo theatre, which in 1913 opened as a vaudeville house which also played stock companies. He operated the Apollo until 1926 when it was sold to Saxe Brothers of Milwaukee. For a short time Mr. Zanias managed the Apollo and Jeffris theatres for the Saxe company and in 1927 he resigned and went to Europe where he spent a year with his mother and sister in Greece.

Upon returning to Janesville Mr. Zanias leased the Myers theatre which he remodeled and opened on Dec. 27, 1929. He operated the Myers until 1939 when he suffered a heart attack that necessitated his being hospitalized for several months.
On June 1, 1940 Mr. Zanias and his cousin William Mihos purchased the Central cafe, 117 W. Milwaukee street.
A native of Eupalion, a village in the northwest part of Greece, Mr. Zanias attended school until he was 14 when he took a job in his uncle’s dry goods store in Massalongi, 53 miles west of hls native village. For three years he worked for his uncle and then took a job with a commission firm. Six years later he came to the United States locating first in Chicago.

James Zanias was a public spirited citizen who gave generously to community projects and enthusiastically endorsed welfare and social programs to aid the needy here and abroad. In his love for his adopted country he never lost sight of the plight of the Greek people. Mr. Zanias headed the Janesville committee that raised funds for Greek relief and was a leader to Hellenic organizations. His friends in all walks of life were legion for he had a genial manner and the gift of understanding the problems of those who came to him in need. His boundless enthusiasm for what ever he undertook was an inspiration to those with whom he came in contact.
Surviving are cousins in the States and four nephews living in Greece. The body is at the Ryan funeral home.

To clarify something above, Rogers Cinema Circuit of Marshfield, Wisconsin bought the theater (not Marshall Field). Also Skouris Theatre Corporation bought the Jeffris in July of 1968 and operated under the United Artists Theatre Circuit. It started with Saxe Theatres so was Saxe’s Jeffris. Then Saxe was sold to Fox-Wisconsin Theatres becoming the Fox Jeffris. The Fox circuit was broken up as part of the Paramount consent decree and Associated Prudential Theaters Inc. Circuit of New York took on the theater advertising it as Johnny Prudential Theaters until being sold to Skouris.

Plans for the Saxe Bros. house that became the Jeffris Theatre were in the works as early as April, 1922, when the project was reported in various construction trade journals. Later, both Saxe Bros. and the architects, Martin Tullgren & Sons, were named as defendants in a lawsuit filed as a result of the partial collapse of the building during construction in 1923.

The theatre that refused to die. After the fire of 1966, the theatre opened much sooner than 1983. It was open all during the 70s as seen by the Moonraker film marquee. I saw quite a few films there including Grease in 1978. Three of the pics were taken by me in the Fall of 2015 and the theatre is still standing. The hotel that was mentioned has been vacant for decades so it does not need any parking. Good thing. The theater although gutted still remains.

The theater’s entrance building remains, but as can be seen in Google’s satellite view the original auditorium has been demolished. Its footprint was quite large, extending most of the way to Dodge Street, and can be seen in historic aerial photos. In one of Allan’s 2015 photos the top of a piece of heavy equipment can be seen beyond a wall. That piece of equipment was sitting where part of the auditorium had been.

Forgot the link to Historic Aerials. And now that I think of it, the brick wall over which the piece of equipment can be seen probably is what’s left of the old auditorium wall. The auditorium was wider than the entrance building. The wall was apparently cut down and capped.