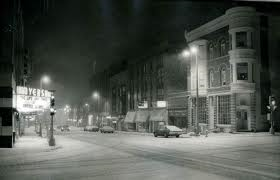 Photo one hour before demo…

Got any working picture links???

I’ve yet to find a University library with a user-friendly web site, but you can find the photos of the Myers by going to the UW library’s Digital Collections page, then putting Myers Theater (that spelling exactly) in the search box.

It’s possible to right click on any given size of a photo there and copy the link address, then paste that here (thus), but then those who click on the link here won’t get the data page with all the details about the photo, just the photo itself. Also I don’t know how long the resulting link will last.

James Zanias, 72, Janesville businessman since 1908 and coproprietor of Central cafe, was found dead in bed in his room at 203 Center avenue at noon Saturday. Mr. Zanias had worked Thursday and returned to his room at midnight. While he had not complained of being ill, Mr. Zanias had suffered with a heart ailment for several years. He had planned to return to his native Greece in January to visit relatives.
Having learned something of the confectionery business in Chicago Mr. Zanias took his first job in Janesville with the Candy Kitchen, now Homsey’s, when he located here in 1906. Two years later he purchased a part interest in the business, Gus Vlachos being his partner.

The two men became interested in the new entertainment medium motion pictures and in 1908 they opened the Lyric theatre, a 5 and 10 cent show at 113 W. Milwaukee street. Business was so profitable that Mr. Zanias purchased the Nickelodeon theatre at 210 W. Milwaukee street in 1909. By 1911 Mr. Zanias had bought out his partner’s interest and sold the confectionery store to the Homsey brothers.
Expanding his theatrical enterprises Mr. Zanias became manager of the new Apollo theatre, which in 1913 opened as a vaudeville house which also played stock companies. He operated the Apollo until 1926 when it was sold to Saxe Brothers of Milwaukee. For a short time Mr. Zanias managed the Apollo and Jeffris theatres for the Saxe company and in 1927 he resigned and went to Europe where he spent a year with his mother and sister in Greece.

Upon returning to Janesville Mr. Zanias leased the Myers theatre which he remodeled and opened on Dec. 27, 1929. He operated the Myers until 1939 when he suffered a heart attack that necessitated his being hospitalized for several months.
On June 1, 1940 Mr. Zanias and his cousin William Mihos purchased the Central cafe, 117 W. Milwaukee street.
A native of Eupalion, a village in the northwest part of Greece, Mr. Zanias attended school until he was 14 when he took a job in his uncle’s dry goods store in Massalongi, 53 miles west of hls native village. For three years he worked for his uncle and then took a job with a commission firm. Six years later he came to the United States locating first in Chicago.

James Zanias was a public spirited citizen who gave generously to community projects and enthusiastically endorsed welfare and social programs to aid the needy here and abroad. In his love for his adopted country he never lost sight of the plight of the Greek people. Mr. Zanias headed the Janesville committee that raised funds for Greek relief and was a leader to Hellenic organizations. His friends in all walks of life were legion for he had a genial manner and the gift of understanding the problems of those who came to him in need. His boundless enthusiasm for what ever he undertook was an inspiration to those with whom he came in contact.
Surviving are cousins in the States and four nephews living in Greece. The body is at the Ryan funeral home.

Louis Rugani In your article about James Zanias, you mention the confectionery store being bought by the Homsey brothers. That would be Louis and George Homsey. Louis was my grandfather and I am looking for any information on him. I am currently transcribing letter he saved from his relative in Janesville, while he was in the Great War (WWI). Anything you could do to point me in a proper research direction, I would appreciate. Thank you Jeannette.

A list of theaters designed or remodeled by the Milwaukee architectural firm Dick & Bauer, published in December, 1929, included the Myers Theatre in Janesville among their remodeling jobs. This must have been the remodeling done earlier that year for James Zanias.