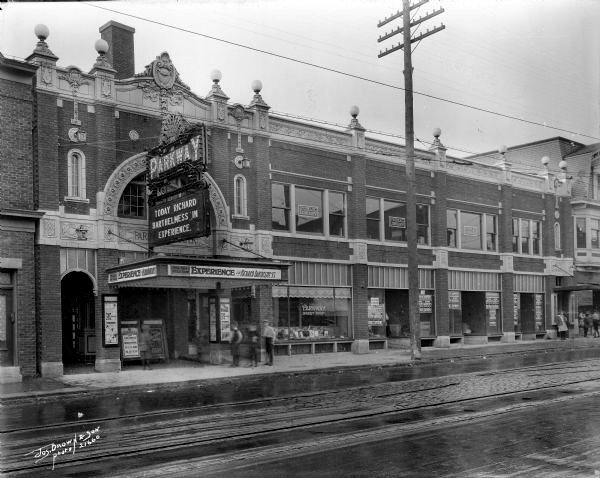 Possibly built on the site of the Rock River Theatre on Milwaukee’s northwest side. The Parkway Theatre opened in 1921. In October 1932, a chemical bomb exploded at the theatre, the latest attack in a series of ‘stink bombing’ that resulted from an on-going dispute between rival projectionist unions. Six were injured in the attack and the crowd of 750 were quickly ushered from the building.

The Parkway Theatre was struggling to stay afloat when it was purchased in 1970 by two Racine men. The Parkway Theatre immediately began showing adult features and became one of several X-rated theatres in the city. However, the Parkway Theatre was the only theatre showing hardcore films and quickly became the target of numerous police raids. In December of 1971, the theatre opened “Deep Throat” to huge audiences. The film played for two months before an FBI raid chased the film to another city.

For 15 years, amid neighborhood protests and police harassment, the Parkway Theatre was Milwaukee’s most popular adult cinema. The theatre was closed in 1986 and razed a few years later. In 1993, before ground was broken for a St. Andrew’s Church building, a pastor ceremonially excorcised the ground on which the Parkway Theatre had once stood. It was the last X-rated theatre in operation in the city.

Information from the book Milwaukee Movie Palaces states that it became the Parkway in 1931 and closed in 1986.The architects were Rosman and Wierdsma.It was previously known as the Rock River Theatre,which opened in 1913.

The pastor exorcised the ground? Give me a break. I suppose he asked all parishioners to tithe 15% of their income to the church.