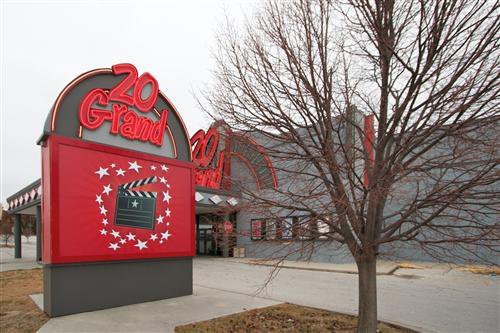 However the 20 Grand Cinemas is now operated by the Marcus Theatres chain and now has only 19 screens. In 2013, it was remodelled and renamed Majestic Theatre.

I remember seeing Must Love Dogs (the one with Diane Lane and John Cusack) here back in 2005 while visiting Omaha. I remember that it was a pretty nice theatre.

And even then it was 19 screens.

I imagine that it was built with 20 screens but one screen either was merged with another screen to create a bigger auditorium or one in used for storage.

Same thing with the Studio 30 in Kansas City and why it has 29 screens instead of 30.

Do the higher profile films get the bigger screen? I seem to recall the Boyd in Philly doing that when it added a couple of sceens next door.

“Nineteen of the screens will be in conventional auditoriums. One special theater will offer simulated roller coaster, airplane and other motion technology rides.”

As of this year, the 20 Grand has been remodeled and now called ‘Majestic’.

Seating in all auditoriums is on Dream Lounger reclining leather chairs.