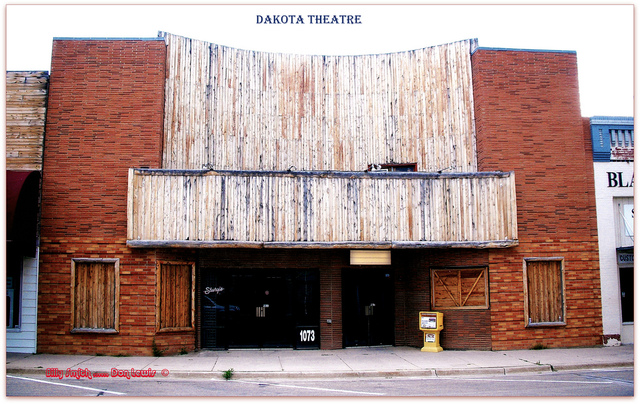 The Dakota Theatre was opened by 1951 and was operating until 1985.

The Dakota was under construction in 1950 when the March 25 issue of Boxoffice reported that the walls and roof had been completed and the heating plant installed. I haven’t found any announcement of the opening, but it probably came that year.

The Majestic was quite old, and was listed in a 1909 business directory.

The Majestic was being rebuilt in 1929, according to the the April 13 issue of Movie Age. 150 seats were to be added to the 500-seat house. I haven’t found the Majestic mentioned later than 1929, nor any other theater in Sturgis until the Dakota was being built. It could be that the Majestic operated until the Dakota opened, perhaps under a different name. It seems unlikely that a town of Sturgis’s size would have been without a movie theater for any length of time between 1929 and 1950, but about as unlikely that it would have supported two theaters at any one time.

A postcard showing the Majestic was sold on E-bay some time ago. Unfortunately even the Google cache of the listing appears to be gone, so no details from the listing page are available.

It’s difficult to research Sturgis because it is one of four towns of that name, and the other three were mentioned in Boxoffice far more frequently than the one in South Dakota.

From July 2010 a photo of the Dakota Theatre building in Sturgis.

Both the Majestic and then the Dakota were owned by my parents theater company. Black Hills Amusement Co. About 5 years ago I tried to locate the old Majestic store front. The best that I could do was that it is now a bar on the corner of the street. It was across the street and “up” the street, Main and Junction. The BH Amusement Co was bought by Commonwealth.

The Majestic was closed when the Dakota was opened.

The Dakota Theatre is listed as open in 1951 and there is no listing for the Majestic Theatre in the same year. The Majestic’s last listing as open was in 1950.

Boxoffice, Oct. 3, 1977: “Russell and Roger Hilton have reopened the Dakota Theatre, Sturgis, S.D. The theatre previously had been operated by Chugach Amusement Co. before it went out of business several months ago.”

Circa 1971 photo added courtesy Photographs From The 1970s.